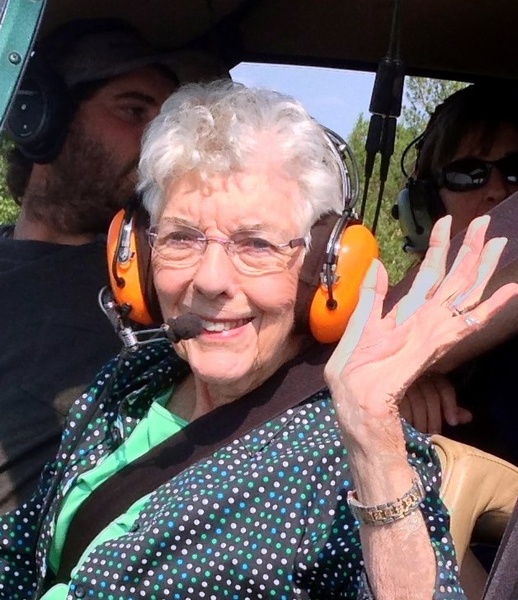 
Wynon Clark, 94, was born in Comanche, Texas, November 1, 1926 to Otis and Vera Smith. She passed away peacefully in Bryan, TX on November 25, 2020. If ever a sweet, generous, loving, beautiful, always smiling, selfless woman deserved to be called "a truly fine lady", it was Wynon!

During the Depression, the Smiths moved from a farm near Maple, Texas, to Memphis, Texas, on to Amarillo, where Wynon graduated Amarillo High. Wynon worked her way through Baylor University graduating in 1948. Her first job after Baylor was teaching business math and typing at Tarleton State in Stephenville. She was the same age as her students! One of which told us, years later, he had a crush on our Mom! Her side job, to save expenses, was as a "dorm mother" on campus. Sallie Clark, her future mother in law, was the head of dorms. Mama Sallie wrote her son, Joe, who was working in Saudi Arabia after the war that he just had to meet this wonderful young woman. Joe came home in November of 1950 thinking he would get that "mother-arranged" date out of the way first so he could enjoy the rest of his hard-earned leave. He was mistaken and his life was changed forever. Joe and Wynon were married Dec 14, 1950. 28 days after that first date at the Baker Hotel in Mineral Wells!

Wynon had to finish her commitment at Tarleton and Joe had to return to Saudi, so they parted for many months. Wynon, having never left Texas before, flew out of Love Field by herself. Six stops and three days later she met Joe at the airport in Riyadh. Her first of many great travels with Joe over the next sixty-three years.

In Saudi, Joe worked for Sam Logan, a fellow Aggie and WWII vet. Sam was manager of a large farm operated by ARAMCO, for the royal family, at the then very remote desert oasis of Al-Karhj. Sam and his wife Mildred became life-long friends. Joe later became manager and they remained until after Carolyn, was born. Their adventures in Saudi Arabia and beyond could fill a book!

Wynon and Joe returned to the "States" with their savings and their beautiful baby daughter. Upon arriving in NYC, they bought their first new car, and headed back to Texas. They spent months reconnecting with family and searching the country for opportunities in agriculture. They started a long partnership with Gene and Doris Roberts, first buying farmland near Pecos, Texas. In Pecos, Annie and Mary were born. Keeping their holdings in Pecos, they moved to Carlsbad, TX where Joe had relatives and had acquired a farming operation along the Pecos River. John was born during their two years in Carlsbad. Next stop was a farm-ranch near Clarksville, TX. Three years later, they returned to Pecos, where they remained for twenty years. For this nomadic couple, Pecos and West Texas with their many great friends there, was home to them. They then spent many wonderful "never-really-retired" years in Granbury, TX until age, health, led them to Bryan, TX, and Joe's passing in 2013.

Wynon is predeceased by her only sibling, Kenneth Smith of Cleburne, Texas. She is survived by her three daughters, Carolyn Mangrem of Alpine, Texas, Annie Clark of Mineral Wells, Texas, Mary Waldson of Gause, Texas, recently moved to Granbury, and son John Clark of Bryan, TX, eight grandchildren and seven great-grandchildren. Wynon very much wanted to be cremated and her ashes released with Joe's, the love her life, out at the family ranch, near Sweetwater, TX, where we will hold a celebration of life next spring.

Much love and thanks to her lifetime of wonderful friends! Many have already left this earth, many are just starting their journeys, all were blessed to know Wynon! Thanks to her friends and great staff at St. Joseph's Manor in Bryan. Memorials may be made to Hospice Brazos Valley, www.hospicebrazosvalley.org.

To order memorial trees or send flowers to the family in memory of Wynon Clark, please visit our flower store.