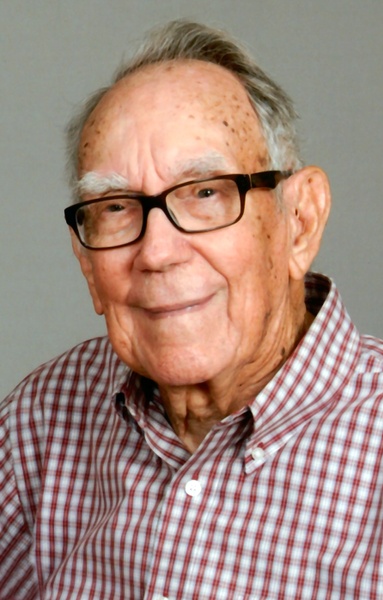 
William Gerald "Jerry" Caughlin, age 91, of Pebble Creek in College Station, passed away on Monday, October 12, 2020, after an unexpected heart attack. Graveside Services will be held on Saturday, October 17, 2020, at 11 AM, in the Memorial Cemetery of College Station, Aggie Field of Honor, with Rev Tommy Myrick presiding.

Jerry was born in Hodge, Louisiana, on February 27, 1929, the son of Ethel Berta and William Luckett Caughlin, both predeceased. He is survived by his wife of 67 years, Jo Ann Caughlin; sister, Millie Brown; and sons and daughters in law, William C Caughlin PMP and Marcee, and Gerald Michael Caughlin, MD and Lisa; and by his grandchildren, Conner, Anna, and Lauren Caughlin.

After graduating from Texas A&M University in the class of 1949, with a BS in Electrical Engineering, he continued his education in the field of Geophysics at various institutions. He served as a Captain (Ret.) in the United States Air Force (Korean War Vet).
An interesting work career, followed with 30 years at Shell Oil Company, traveling and working all over the world as a Geophysicist and Exploration Manager. After retirement from Shell, he worked at Mosbacher Energy Company for 10 years prior to moving to College Station and continuing his consulting work in oil exploration.

As a former member of the Texas Aggie Band at Texas A&M University, Jerry and his wife, Jo Ann, donated to President's Endowed, Corps, Sul Ross, and Electrical Engineering scholarships for A & M students, and provided a practice room in the new facility of the Department of Music on campus to further student learning.

He was a member of various Shell Oil Clubs and Organizations, the Society of Exploration Geophysicists, a lifetime member of the Association of Former Students, and the Texas Aggie Band Association. He was a long-time member at Christ United Methodist Church in College Station.

In lieu of flowers, the family requests that memorial donations be sent to the Texas A&M Foundation, 401 George Bush Drive, College Station, Texas 77840. Please designate gifts "In memory of Mr. William G. Caughlin "49" in the memo line of the check. Gifts received will be applied to the Eternal Aggie Band Endowment account, 0457235.

To donate online go to give.am and select Unlisted Account Eternal Aggie BandEndowment account 0457235. In the gift detail section please select, this gift is in honor of someone special, "In memory of Mr. William G. Caughlin "49".

If you come to the service, please wear face masks for everyone's protection.

To order memorial trees or send flowers to the family in memory of William Gerald, please visit our flower store.