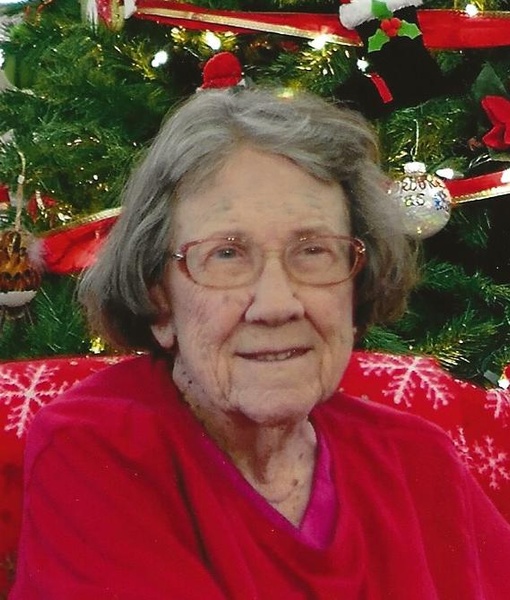 
Vivian Benson Sanders, 95, of Bryan, died peacefully on Saturday, May 30, 2020, after living with Alzheimer's Disease for several years. No services are planned at this time.

Vivian was born on Christmas Eve in Port Arthur, but grew up in Houston. She met Floyd Sanders at a church social on New Year's Eve 1939, and they were married on December 21, 1940. After his service in the Army Air Corps, the couple made their home in Houston, where their four children were born. Floyd's work took them to Freeport and then to Alvin. When they retired in 1982, they moved to Bryan where she became active in First Baptist Church of Bryan and other community organizations. Floyd and Vivian had just celebrated their 72nd anniversary when he passed in 2013.

A lifelong committed Christian and consummate Biblical scholar, Vivian's life was her witness. She taught many Sunday school classes throughout the years, and even led morning devotions in her assisted living facility.

To say Vivian was unique doesn't even begin to describe her. She was genius-level smart but was filled with common sense and wisdom. Her curiosity was limitless and multi-faceted. She was always interested in learning from people and about people, no matter who they were. Her brilliance made seeing her mind decline all the sadder.

She earned her accounting credentials by correspondence, and worked in the field for 30 years, ultimately retiring from her last part-time job at 85. She continued to take occasional college courses throughout the years. In fact, she was riding her bicycle home from TAMU after her advanced Spanish final when she fell and broke her hip; she was 65.

Vivian was a prolific writer, publishing hundreds of articles in local, regional, and national newspapers and magazines. She was also an accomplished musician who played both the piano and the violin and performed in her church orchestra for many years.
Vivian Sanders was preceded in death by her parents, Vivian Parker Benson and Joseph Prue Benson; her brother, Joseph Prue Benson Jr.; and her son and daughter-in-law, Donald Lewis Sanders and Anne Little Sanders.

She is survived by her children and their families, Margaret Sanders and Charlotte Phillips, Ray and Kay Sanders, and Allen and Rhonda Sanders; 12 grandchildren; and 25 great-grandchildren.


To order memorial trees or send flowers to the family in memory of Vivian Sanders, please visit our flower store.