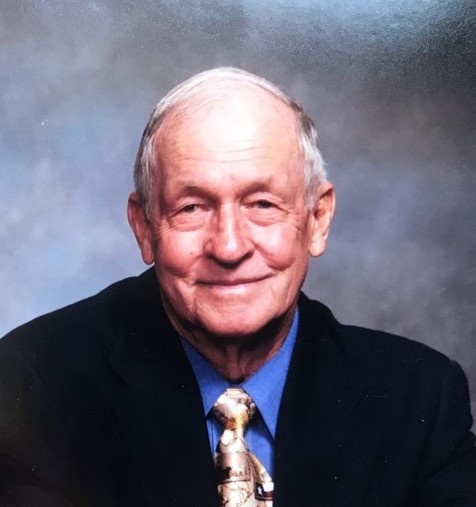 
Tommy E. Gibbs, 93, of College Station, was born in Wichita Falls, Texas on April 22, 1928 to Edgar L. and Willie Gibbs. After high school, he joined the travelling rodeo and saw many northeastern states including Yankee Stadium where he broke his arm. He joined the Army and served as an Engineer. Tom met and married Maurice Parrish in 1952. It was then that Tom made his public profession of faith in Jesus Christ and was baptized.

He worked for the railroad before forming his own independent company serving the oil and gas industry in north Texas. His interest in horses and cattle led him and Maurice to create a horse conditioning facility known as Mesquite Creek Farm. They bought and resold young horses in several states and Mexico and stood two different breeding stallions, one being Mr. Seco Sandy that they later donated to Texas A&M University's horse program in the Department of Animal Science.

Tom was a devoted husband to Maurice and always strived to be a good father as he provided many wonderful opportunities for his children, Brenda and Pete. He truly enjoyed spending time with his two grandchildren, Dustie and Tyler.

In 1980, they moved their horse operation and Maurice's real estate businesses to College Station. Tom was a well-known and highly respected horse show judge, officiating shows across the United States, Canada, Mexico, Germany, France and Italy with some 20 trips to Europe. He also really enjoyed Longhorn cattle, being an owner and breeder for 30 years.

In College Station he and Maurice were active members of the First Baptist Church, the Cornerstone Sunday School class, and Tom made Sunday coffee for the all the classes, something he thoroughly enjoyed as he cherished friendships with members of their church.

Tom is survived by daughter and son-in-law Brenda and Doug Householder; son and daughter-in-law, Pete and Colette Gibbs; two grandchildren, Dustie Kay Householder and Tyler Parrish Gibbs; sister, Dorothy Powell; and brother, Don Gibbs. He was preceded in death by his parents, Edgar and Willie Gibbs; and his wonderful wife of almost 70 years, Maurice.

A Graveside Service will be held in Hamilton, Texas at a later date. Please contact Hillier for more information. Robert Lynn Parrish will officiate the service.

To order memorial trees or send flowers to the family in memory of Tommy Edgar Gibbs, please visit our flower store.