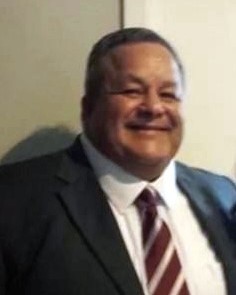 
Steven Alfredo Quintero, 58, of Bryan, went to be with his Lord on Sunday, May 16, 2021. The family will remember Steven as the greatest man you'll ever know. The hardest worker on any jobsite. The most loving father, a helper with the heart of gold. The best grandpa, and an amazing soul, are just a few things to describe him. He will be missed dearly by his friends, family, and loved ones.

Steven was born in Fort Worth, Texas, on April 8, 1963, to his parents, Alfredo Quintero and Julia Perez. Steven enjoyed his younger years playing football. He graduated from high school, then Steven worked as an electrician serving the Brazos Valley area for 26 years. He was dedicated to his work, and found it more as a passion than a job. A manly man, he was the hardest worker.

Steven fell in love and married Mary Quintero. He fathered 9 children, Christal, Grady, Lillyn, Angela, Benito, Juana, Diana, Stephanie, and Steven. He enjoyed being a father, and was even happier when they brought grandchildren into his life. He loved being a grandpa, and enjoyed his special time and holidays together with his family.

Pool, rosters, chess, and old school rock bands were his thing. He was always helping, lending a helping hand to anyone in need. He enjoyed the simple family life, and life enjoyed him.

Steven will be reunited with his father, Alfredo Quintero; his sister, Adalida; grandmother, Rita Perez; and mother-in-law, Bettye Treece.

Today we say "I'll see you again" to the greatest man some of us will ever know. We leave him with comfort knowing he is walking through the golden gates of heaven rejoicing. Enjoy yourself up there, because you deserve the greatest gifts life could ever give!

To order memorial trees or send flowers to the family in memory of Steven A. Quintero, please visit our flower store.