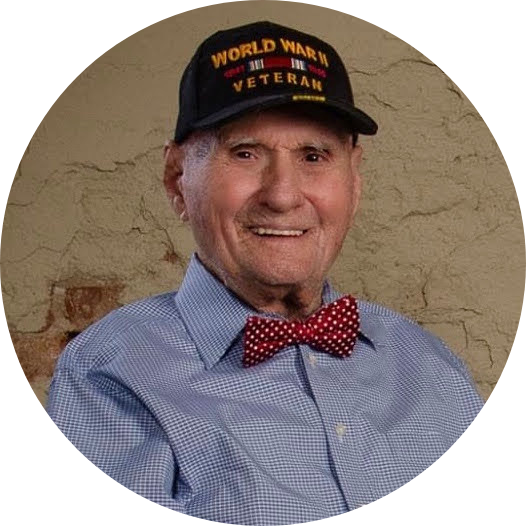 George Alfred Myrick went to rest with his Lord and Savior on January 30, 2022, surrounded by his family.  He is preceded in death by his loving wife of 63 years, Joyce Estelle Myrick, his brothers and their wives, Harold and Lillie Myrick, Johnny and Betty Myrick, and his sister, Jo Ann Stallings.

George was born in Stockdale, Texas, on November 10, 1922, to George Arthur Myrick and Ethel Wade Myrick.  His father passed away when George was young and as the oldest of three boys, he helped support the family by sacking potatoes, a staple during the Great Depression, for customers that came into the store where his mother cashiered.  George was raised in the East End of Houston near the Houston Ship Channel.  He became a paper carrier for the Houston Press while still in elementary school and would get up before dawn to start his day.

George graduated from Charles H. Milby High School in Houston and went on to become a licensed electrician with the International Brotherhood of Electrical Workers Local Union 716 for 79 years.    As a proud member of the Greatest Generation, George served in the Army Air Corps during World War II.   He loved to tell stories and one of his most inspiring stories was about the day he and his brother went to sign up the day Pearl Harbor was attacked.  He and his brother stood in line for three days in downtown Houston, each day arriving earlier and earlier, before they were able to volunteer to go to war.  Once they were registered, George worked one more week, said goodbye to his family, and was on a troop train leaving from Ellington Field.  He always said he had never seen more patriotism in his 99 years than those three days after Pearl Harbor was attacked.

George became a Staff Sergeant in the 2545th Army Air Force Base Unit and was honorably discharged on February 20, 1946. He always told his family that he was one of the lucky ones. During his time serving his country, he was stationed in Kansas, Nebraska, and California, where his unit boarded a ship headed to the Pacific Front.  At the last minute, George said his unit was taken off the ship and assigned as essential personnel, changing out airplane engines coming in from the Pacific Front.  As a crew chief, George said they could change an engine and have the plane back in the air in 15 minutes or less.

After the war, George returned to Houston to marry the love of his life, Joyce Estelle Jamison, and raise a family of five children. In 2001 he and Joyce moved to Bryan to enjoy their retirement. He is survived by his children and their spouses, Joy Myrick Teague, Cindy and Robert Schnuriger, George and Maureen Myrick, John Myrick and Tom Lewis, and Marilyn and Johnny Moore.  He is also survived by many grandchildren and their spouses, Carlyn and Michael Garcia, Amy Teague, Dustin and Addie Teague, Cody Schnuriger, Callie Schnuriger, Katy and Matt Krumm, Kelsey and Eric Jones, John Morris and Kerry Moore.  He is also blessed with great grandchildren, Brittany, Jonathan, and Jayden Garcia, Briana and Isaiah DeLeon, Delilah Teague, George and June Teague, Darsey, Emma, Stella and Livi Krumm, and Taylor and Easton Jones.  He is also survived by brother-in-law, Ronald Stallings, sister-in-law, Roane Lee Jamison Dubose and numerous nieces and nephews and their children.

George was an incredible gift not only to his family but to all that knew him! He was a daily picture of grace and a giver of encouragement and wisdom. He was a shining example of what a strong, faithful, passionate, hard-working man looks like. He gave back to his community and those he loved in countless ways.  He was kind, generous, always spoke truth and was an example of how to be an amazing loving man and have fun along the way.  We have no doubt that he heard the words “Well Done My Good And Faithful Servant” as he met Jesus.

The family would like to thank Traditions Hospice and Rehab for their compassionate care, his primary care doctor, Dr. Julie Lim, and his kind and loving caregivers, Sorrel Coyle and Janet Newcomb.  In lieu of flowers, please consider a donation to Brazos Valley Cares, an organization that assists local veterans in need, or a charity of your choice.

To order memorial trees or send flowers to the family in memory of SSgt George Alfred Myrick, please visit our flower store.