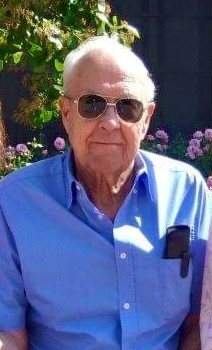 
Robert Mathis, 91, of Bryan, Texas, went home to be with his Lord and Savior on January 4, 2021. Robert was born in Palestine, Texas to his mother, Birdie and father, Lee Roy. He spent his childhood in Palestine growing up with his brothers. In his early years he enjoyed riding horses, raising cattle, and "rough housing" with his two older brothers. As a teenager Robert was very involved at his high school and was loved by his peers. He was a football star but got his letterman in football, basketball, and track.

When Robert graduated from high school he decided to attend junior college for two years. After college, he became a police officer for Anderson County Police Department and then decided to pursue a career in long haul truck driving for the Union Pacific Railroad Company.

Robert met the love of his life, Texana, at a dance where he was playing drums. Texana bet her friend that Robert wouldn't ask her to dance but he did, starting a sweet love story. Robert and Texana were married for 61 years and had a beautiful daughter, Kristie. Kristie was the center of both of their lives. They were later blessed with a loving son-in-law, Darin Deutsch, and a granddaughter, Kaitlyn Deutsch.

Robert will always be remembered for his love for golf and Texas A&M. He spent a lot of his free time watching Aggie football, playing golf, fishing with his family, and taking family trips.

The most important thing in Robert's life was his family. He was a loving husband, father, and grandfather. Robert was very proud of his granddaughter, Kaitlyn, and captured many of their memories by videoing her with his camera while she was a young child. He would be so proud to know that she is planning on attending Texas A&M.

Robert was a kind man who deeply loved his family and friends. He will be missed by all who knew him.

A special thank you to the caregivers at Hospice Brazos Valley who assisted Robert and his family.

To order memorial trees or send flowers to the family in memory of Robert Mathis, please visit our flower store.