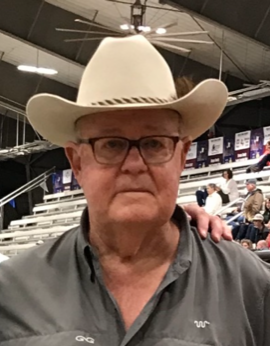 Richard T. “Dick” Britten was born in Bryan, Texas on December 21, 1944, the oldest son of Walter S. and Pearl Gerke Britten.  After a long battle with cancer, he died on Memorial Day, May 30, 2022 at his home on Britten Ranch, surrounded by his family.

Dick, a native of Brazos County, started raising cattle when he was 11 years old.  For many years he was a professional auctioneer alongside his father, travelling throughout much of Texas.  He rarely went anywhere that he didn’t run into someone he knew from his ranching and auctioneering businesses.  Dick was also a real estate broker for a number of years, predominately buying and selling Texas ranchland.  He lived on the Britten Ranch in Brazos County his entire adult life and owned a second home on Lake Limestone for over 40 years.  He loved to fish, cook, and work in the yard.  He and Debbie enjoyed taking many wonderful trips; his favorite was to South Dakota.  Known to many as “Big Dick”, he had a large personality, loved a good practical joke, and had a great big belly laugh.  Above all, his pride and joy was his family, followed by the rich heritage of the family ranch.

Dick was preceded in death by his parents, Walter S. Britten and Pearl Britten; and his father-in-law, Milton R. Dietzel.

He is survived by his wife, Debbie; son and daughter-in-law, Rick and Dina Britten and their sons, Hunter and Dylan; daughter and son-in-law, D’Anne and Buddy Johnson and their daughter and son-in-law, Kailey and Hunter Cook. He was a proud great-grandpa to Collin Cook. He is also survived by his mother-in-law, Ruby Dietzel; three step-sons and daughter-in-laws, Derrick and Kelley McKethan and their children, Taylor and Cooper; Brandon and Wendy McKethan; and Travis and Sabrina McKethan and their sons, Matthew and Samuel; brother, Randy Britten and his wife Elizabeth, and niece Renee Britten and nephew Matthew (Courtney) Britten, and their daughter, Harper. When he and Debbie married in 2007, he added a host of “in-laws” including brothers-in-law Rawley (Kathy) Dietzel and Jeff (Dawn) Dietzel, sister-in-law Sandra (Troy) Wacker, and many more nieces and nephews.

To order memorial trees or send flowers to the family in memory of Richard T. “Dick” Britten, please visit our flower store.