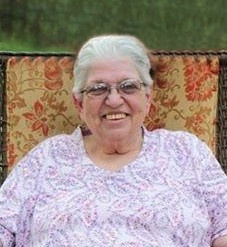 Services will be held at 3pm on Thursday, January 9,2020, at Bethel Baptist Church in College Station with Bro. Clyde Strong officiating. Burial will follow at Old Bethel Cemetery. A visitation will be held at the church on Thursday from 1pm to 3pm.

Pat attended schools in Spur before graduating from Garden Grove High School in Garden Grove, CA. She would later attend Blinn College and obtain an associate's degree in 2000.
She served honorably in the United States Army from 1974—1977 and was stationed at Fort Hood in Killeen. She was honorably discharged at the rank of Specialist (E-4).

Pat worked as a typesetter and proofreader in the newspaper industry for over twenty years, working for newspapers in southern California and Texas, including the Bryan/College Station Eagle. Pat also owned a restaurant, drove school buses for College Station ISD, and worked many customer service jobs before retiring in 2004.

She was a talented oil painter, enjoyed crocheting, waterskiing, and growing tomatoes. Pat was famous for her straw hats, loved a bowl of peach ice cream, and could always be found with a cup of coffee in hand. She was also a fan of any and all crime TV shows, never missing an episode of Murder She Wrote, Law & Order, or CSI.

Pat was an active member of Bethel Baptist Church for over thirty years. She served as church secretary, helped with Sunday School, and volunteered with the Vacation Bible School program.

She is preceded in death by her parents, stepfather Joe Terrell, sister Nadine Kelly, and son-in-law Jay Bowers.

Memorials may be made to Bethel Baptist Church.

To order memorial trees or send flowers to the family in memory of Pat Willey, please visit our flower store.