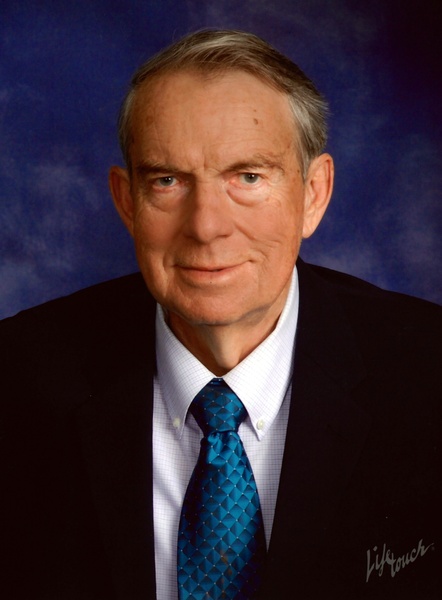 
Oscar Henry Beard passed away on Tuesday, May 19, surrounded by his family, at his home in College Station. Oscar, a kind and gentle man, was a loving husband, caring father, devout Christian, and accomplished businessman.

Oscar was born October 26, 1937, in Broaddus, Texas. He was the twelfth of thirteen children. Oscar graduated from French High School in Beaumont, Texas, in 1956 shortly after joining the Air Force Reserves. In June of 1956, a fellow reservist arranged a blind date for Oscar with Nancy Strickmeier. Oscar and Nancy were married August 30, 1958, at First Lutheran Church in Galveston. At that time, Nancy was a sophomore at Rice Institute and Oscar worked full-time at Armour Meat Packing, while attending night classes at the University of Houston. In 1959, Oscar was baptized and confirmed at Christ the King Lutheran Church of Houston.

In February of 1961, they started their family with the birth of their daughter, Lynda. Nancy graduated from Rice University in 1961 enabling Oscar to attend the University of Houston full-time and work at Armour only on Fridays. While at the U of H he was inducted into Alpha Pi Mu, an American honor society for Industrial Engineering students. In 1964, Oscar was employed as an engineer at Gift Wraps while waiting for his final course requirement to be offered. Their second daughter, Debra, was born in August of 1964. Oscar graduated with a Bachelor of Science in Industrial Engineering from the University of Houston on June 4, 1965. Making an impact early in his career, he was particularly proud of the efficiency improvements that he made in merchandise receiving and distribution at Foley's in Houston.

Oscar and his family moved to Bryan, Texas, in 1966, where he was employed as residential production manager at Alenco. In June of 1966, their third and final child, Brad, was born. Oscar became a Registered Professional Engineer in 1970. After serving on the board of OMC Industries, he accepted a position with OMC, rising to the position of Vice President. In 1991, Oscar opened Enercon Windows as a sole proprietorship. He persuaded his son Brad to return to Bryan to manage Enercon in 2002. Oscar remained active at Enercon until July 31, 2017.

Oscar was an active member of Our Saviour's Lutheran Church for 54 years, serving three terms as president of the congregation. In 2014-15, he served as president of the College Station Rotary Club. Nancy and Oscar traveled together to New Zealand and Australia to attend the International Rotary Convention in Sydney. As a Rotarian, he served as a member of the steering committee for The Fun for All Playground, a handicap accessible playground at Central Park in College Station. Oscar was recognized by the Rotary Club as a Paul Harris Fellow. He also served on the board of the Twin City Mission.

Oscar and Nancy traveled to Basel, Switzerland in 2015 to watch their grandson, Kyle, march and play with the Blue Devils at the Basel International Band Festival. Oscar enjoyed fishing, hunting, and gardening. One of his favorite activities was spending time at the North 40, a property he owned near Hearne. All his children and grandchildren were able to spend time with him there. He generously opened his property to the Our Saviour's Lutheran youth group and the Boy Scout troop of his grandsons, John and Stephen, for camping and harvesting of wood.

A fierce competitor, he thoroughly enjoyed playing 42, bridge, and poker. He served as president of the Star Duplicate Bridge Club.

A private funeral and internment will be held on Friday, May 22 with his seven grandchildren serving as pallbearers. The internment will be live streamed on Friday at 11:00 a.m. on the Our Saviour's Lutheran BCS Facebook Live page. A recording of the service will be available Friday afternoon on the Hillier's Funeral Home site. A Celebration of Life will be held at a later date.

To order memorial trees or send flowers to the family in memory of Oscar H Beard, please visit our flower store.