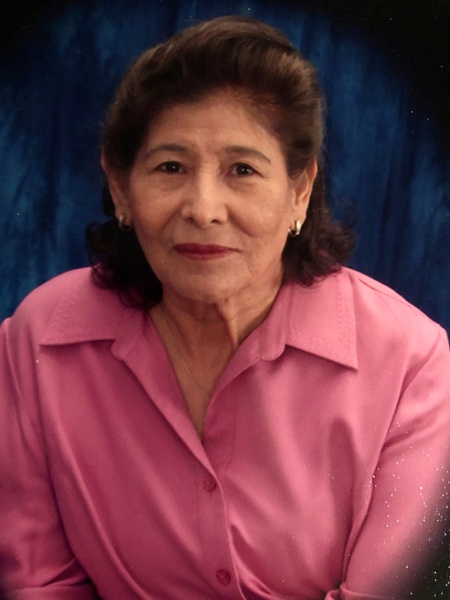 Melecia was born February 12, 1930, in Apozol, Zacatecas, Mexico, to Felix Mejia and Cleofas Vicencio.  She was the youngest of nine, 3 brothers and 5 sisters – all predeceased.

As a young child/teen, she was an active member at Nuestro Senor de la Ascension, Parroquia de Apozol, Zacatecas where she joined Las Hijas de Maria (Daughters of Mary), and planned on becoming a nun.  After her father died, she helped support her family by selling snow cones and refrescos (drinks) as a street vendor.

Mele met her future husband, William Rodriguez, when he vacationed one year in her hometown with a mutual friend.  After corresponding by letters for a year, he made his next trip with bridal attire and rings and made his proposal.  They married April 1, 1957 in a small, private, pre-dawn Church ceremony.

Mele lived in Chicago, Illinois from then until the birth of her 6th child in 1965, and then they moved to Calvert, Texas where their youngest was born.  She was a homemaker and raised all of her children in the Catholic faith, of which she was extremely devout all of her life.

She was a member of St. Mary’s in Hearne and the little chapel in Calvert for many years where she led the congregation in song, accompanied by her daughters.

After becoming a widow, she travelled around the U.S. visiting her daughters in Michigan, North Carolina, California and Chicago.  In 2001, right after 9/11, previous arrangements had been made to visit Medjugorje.  Trusting in God Almighty, she and two of her children flew to Bosnia, where she spent 7 days in Medjugorje and 4 days in Rome.  While in Rome they attended Mass at the Basilica – officiated by Pope John Paul II whom she deeply admired!  She had a great, life-long devotion to our blessed mother, Mary.

Her grandchildren were her joy.  God truly blessed us all with a gentle, loving, virtuous, pious mother and friend.

On behalf of the family, we thank you all for coming.

To order memorial trees or send flowers to the family in memory of Melecia Mejia Rodriguez, please visit our flower store.