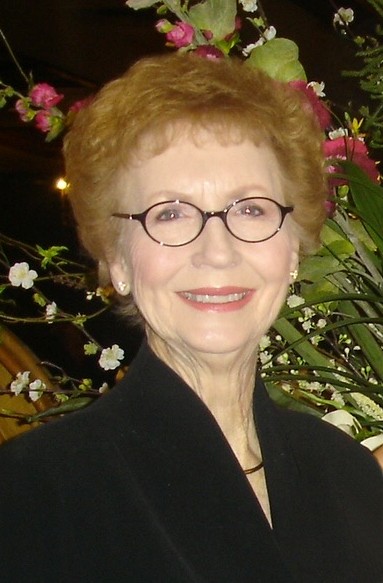 
Mary Evelyn Bayliss passed away peacefully on May 15, 2021 at Crestview Retirement Community.

Mary Evleyn Futrell was born on October 23, 1927 in Timpson, Texas to James Jefferson Futrell and Evelyn Davidson Futrell.
Mary Evelyn grew up in Timpson, Texas where she excelled in school. Mary Evelyn had a thirst for knowledge from a young age and was always looking to expand her horizons. As a child, she learned to play the piano, organ and violin. As a young woman, Mary Evelyn enjoyed many hours sharing her musical talents at Timpson First Baptist Church.

Mary Evelyn was an only child; however, she had the good fortune of growing up with her cousins Helen and Bruce Davidson. Her parents played a large role in the raising of her cousins and kept their house full of children and family. Mary Evelyn's parents were one of the greatest influences in her life. Anyone that knew Mary Evelyn, knew of her extreme love and admiration for James and Evelyn Futrell. Their dedication to her nurturing, whether it be through education or selfless love, made Mary Evelyn into the successful, intelligent woman that went on to become the matriarch to a large family.

Mary Evelyn graduated from Timpson High School with Honors in 1944 at the age of 16. She enrolled at Baylor University and received her degree in Biochemistry in 1947. Thereafter, Mary Evelyn went on to receive her Master's in Medical Technology at the University of Texas Medical Branch in Galveston, Texas. Upon receiving her Master's, she went to work as a Medical Technologist for Francis Ann Lutcher Hospital in Orange, Texas. It was during this time that a double date at the beach changed her life forever after meeting her dreamboat, Garland Erastus Bayliss. It was love at first sight as Garland and Mary Evelyn fell madly in love and were married on May 5, 1950.

Shortly after marrying, the couple moved to Austin, Texas where Garland pursued his Master's and Doctorate in History. Prior to finishing his Doctorate, Garland received an offer to teach at the Citadel in Charleston, South Carolina. Mary Evelyn and Garland accepted this offer and they relocated while she was expecting their first son, David. In 1957, the couple returned to Texas when Garland accepted a job at Texas A&M University teaching History. At this point, Mary Evelyn accepted a research position under Dr. Mac Prescott, Dean of Science and began her 30-year career at Texas A&M. Mary Evelyn excelled at her position alongside her good friend and research partner Stella Wilkes.

Mary Evelyn's time at Texas A&M was extremely busy and fruitful. It was well known by friends of the family that asking about her day would end in discussions of DNA, Proteins, Mutations, Plasmas, Substrates and Moonrocks to mention a few. Luckily, if her youngest son Fred was around, he would ask to change the subject and eat, which offered a needed break from science talks. Her work furthered cancer research through the breakdown of human and marmoset monkey DNA. She was also instrumental in research regarding the compound that we know today as CoQ10, most commonly used for conditions that affect the heart and is found in many skin care products.

Mary Evelyn was not only a distinguished scientist and a dedicated mother to three boys, but she was also extremely involved in her community and church. Garland and Mary Evelyn were active at First United Methodist Church, where she was a member of the Upper Room Sunday School Class. In addition, she worked on many charity and construction projects for the Church with Garland throughout the years. Mary Evelyn was a distinguished hostess and a graceful guest to many occasions. She thoroughly enjoyed bridge and was a member of "the 42 group." She also served as the Pianist of the Lower Base Trio at Sunday School. Beyond church, Mary Evelyn was a member of Chapter BG of P.E.O. for 54 years to which she served as a past president and was honored as a Golden Girl to the group. Mary Evelyn was also a member of The Woman's Club in Bryan; an active member of Voices for Children; A&M Women's Social Club, where she served as President and a member of The Brazos Valley Symphony and Keep Brazos Beautiful, to which she served on the Board of Directors for both. Furthermore, she was a Paul Harris Fellow in the Bryan Rotary Club and Advisor to SCONA XII. Mary Evelyn was involved in many social groups, dinner groups and philanthropic groups throughout her life. She and Garland were also avid travel partners who never missed an opportunity to explore a new area whether it be in the United States or destinations around the world. She blessed friends and family at Christmas time with her homemade peanut brittle. Mary Evelyn led an exciting, busy and meaningful life that lives on with family and friends and leaves behind an outstanding legacy.

In lieu of flowers, the family wishes donations to go to P.E.O. Program for Continuing Education, 1810 Shadowwood, College Station, TX 77840.

To order memorial trees or send flowers to the family in memory of Mary Evelyn Bayliss, please visit our flower store.