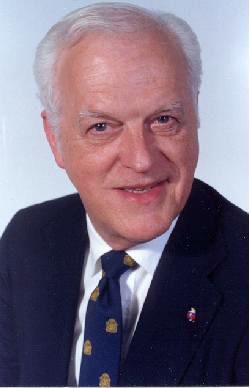 Lowell Varner Hammer, 91, of College Station, TX, went to be with his Lord on 7 January 2020. Lowell was born in Ligonier, PA, to the Reverend John Domer Hammer and his wife, Edythe Lenore Hammer. He was educated in the public schools of Ligonier, Greensburg, and Johnstown, PA. He received a Bachelor of Arts in Foreign Service from Penn State in 1950 and was commissioned as a Second Lieutenant in the Army where he served in the Far East Command, based in Japan, until his release from active duty in 1953. He then attended Fletcher School of Law and Diplomacy, earning an MA in 1954.

He began his career in Washington, D.C., where he met his future wife Elizabeth Carter Bowers of Chevy Chase, MD. During his career of over 30 years in foreign affairs with the U.S. Federal Government, he served as an officer in executive branch agencies including the Foreign Service of the Department of State. Lowell and Elizabeth served enthusiastically abroad in Morocco, Zaire, and France. After his retirement from the service in 1985, he continued to serve as a consultant in international security affairs.

As hobbies, in addition to his genealogical and historical pursuits, Mr. Hammer engaged in oil and water color painting, photography, antique restoration, artifact preservation, and print matting and framing. After forty years of research and writing, he published a 706-page family history/genealogy entitled Johan Frantz Hammer, Palatine Pioneer in Pennsylvania and Maryland and his Descendants.

He is preceded in death by his father and mother, his brother Emerson, and his son Christopher. He leaves behind his beloved wife of 63 years, Elizabeth, his daughter Sarah Haberl and her husband Jeff, his son Lowell Carter, his grandsons Alex and Andrew, and his granddaughters Michelle, Betsy, and Catherine.

Memorial services will be held later in the year.

To order memorial trees or send flowers to the family in memory of Lowell Hammer, please visit our flower store.