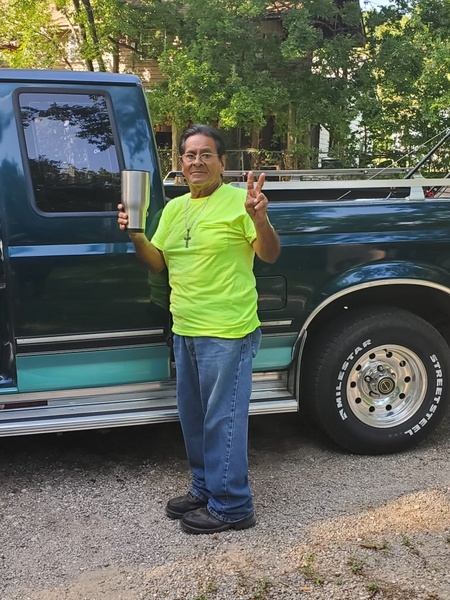 Lonnie was born in Hearne, Texas, on January 12, 1950, to his parents, Frankie and Marcelina Gomez. He spent his childhood growing up in Hearne with many brothers and sisters. Lonnie was a dedicated and hardworking man, even from a young age. When Lonnie was in the 7th grade he left school and began to work on a farm with his brother to help provide for his family.

When Lonnie grew up, he pursued a career working for the City of Hearne, a job he did for over 40 years. He also enjoyed mowing lawns on the side. He worked very hard to provide for his family. Lonnie enjoyed working, and created a collection of "junk." He would pick up anything from the side of the road or from his job to bring home! At work, he was fondly known as Chapparo (Shorty) or Papa Cholo. His job was a hobby for him, not work. His work ethic was respected by many of his friends and family, as he was one of the hardest working man they knew.

Lonnie married Alicia Gomez, after a few short months of dating. They met when Lonnie asked Alicia to dance at a school dance, they dated for two months, and they fell in love and decided to spend the rest of their lives together. They just celebrated their 50th wedding anniversary on February 27, 2021. They enjoyed many happy years together. They had two sons together, Lonnie Jr and Paul. Lonnie was a family man, he loved to cook breakfast for his family and spend every moment he could with his wife and children. He also loved his grandchildren and great-grandchildren very much. They were his top priority, even though he loved his entire family. He also loved his Chihuahua, Lalo.

Lonnie enjoyed fixing things, even though it usually made it worse! He would constantly try to fix things with duct tape. Gathering friends and family for a bbq were some of his fondest memories. He enjoyed cooking for his family, and just enjoyed everyone being together. There was no such thing as not being together for a holiday. He loved telling stories, playing jokes on people, and he would help anyone in need. He had a strong Catholic faith, and loved reading Joel Osteen's book.

He will be reunited with his parents, Frankie and Marcelina Gomez; siblings, Lalo, Julia, Isidora, Paul, Lupe, Frankie Jr., and Johnny.

To order memorial trees or send flowers to the family in memory of Lonnie Gomez Sr., please visit our flower store.