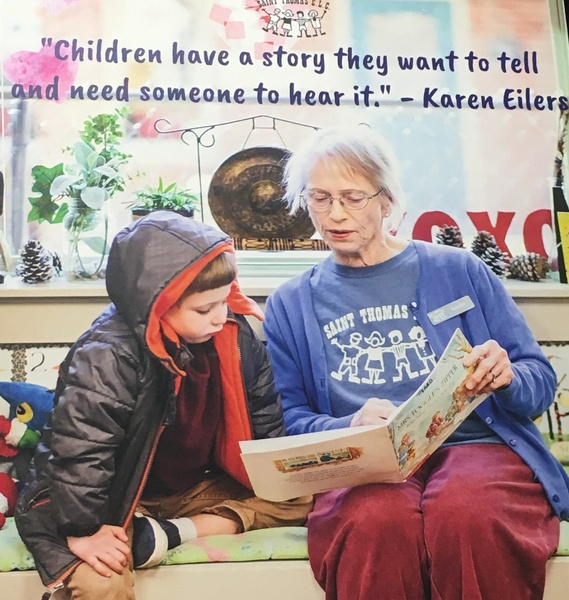 
Karen Jean Phillips was born August 12th, 1939, in Saginaw, Michigan, to Howard Charles Phillips and Elsie Elizabeth Huebner. She graduated in 1957, from Arthur Hill High School. She went on to be an RN at Saginaw General Hospital, where she specialized in pediatrics, beginning her lifelong journey of caring for and teaching children. In the summer of 1964, Karen was introduced to the love of her life, Howard, by stable owner Paul Schwartz, where they both kept their horses. After a wonderful courtship that fall, Howard had accepted a job in Bemidji, Minnesota. That Christmas, Howard proposed to Karen at the stables where their horses were kept. Howard's wedding gift to Karen was Gaffle, a pure-bred Arabian show horse. They were married May 1, 1965, the beginning of the "65 Love Affair", that lasted 56 years.

Howard and Karen moved to Bryan in the summer of 1969, shortly after the birth of their son, Hans, in January. Howard began his 51-year career as a Professor of Photo Journalism at Texam A&M University while Karen stayed at home with Hans. In September of 1978, their daughter Sabrina was born. As Sabrina was going into Kindergarten, Karen was asked by Valerie Woodcock at St. Thomas Early Learning Center, where both Hans and Sabrina attended, to be a teacher's aide. Karen began working with the 5-year old class with Valerie Woodcock, and later moved to 1st grade where she worked with Mary Skow. Karen always enjoyed helping children learn to express themselves and make good choices. She enjoyed reading many books to the children. At the end of her 35-year career at St. Thomas, Karen spent her time working in the office but still made time to see the children.

Karen was born and raised Lutheran and married Howard in her home church of Zion Lutheran Church in Saginaw, Michigan. She was more than 100% steadfast in her faith and a strong prayer warrior. She rarely missed a Sunday morning service in her 81 years and always sent her family on their way with the blessing of God's Peace.

Karen was a devoted mother who would do anything for her children- never missing a school performance, piano recital, soccer game, orchestra concert, or swim meet. She always put her children first and always was lovingly concerned about Hans and Sabrina's daily lives.

Karen has two grandchildren, Lynley Eilers, 23, a model and activist in New York and Los Angeles, and Lars Eilers, 17, a senior at Leander High School.

Karen and Howard celebrated their 56th wedding Anniversary on May 1st of this year.

Karen is survived by her husband of 56 years, Howard, her sister Joan Berry, her son Hans and his wife Michele, daughter Sabrina Behrens and her husband Samuel, grandchildren Lynley and Lars, and her cats, Mikey, Kona, and Vader.

In lieu of flowers, donations may be made to the Arthritis National Research Foundation (www.curearthritis.org) or Jamie's Animal Rescue (www.jamiesrescue.org), or Peace Lutheran Church (www.peacelutheranbcs.org).

God's Peace be with you Karen.


To order memorial trees or send flowers to the family in memory of Karen Eilers, please visit our flower store.