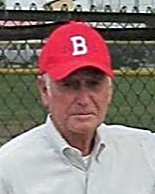 J.B “Coach” Carroll of College Station, Texas passed away January 24th at the age of 86.

J.B. was born and raised in the College Station area, attending both A&M Consolidated High school and Texas A&M University.  After graduating from Consolidated, J.B. continued his athletic career at Texas A&M and simultaneously served his country as a member of the Army National Guard. He initially played numerous sports, including football and track, but he excelled on the baseball field. Although he was only 5’6’’ in stature, he stood much taller. He was an integral part of the Coach Chandler era, seeing success in baseball as Southwest Conference Champions and personally, as a Southwest Conference All-Star. His efforts were rewarded, and was asked to remain at Texas A&M as the pitching coach. His path then led him south to Brazosport High School and in the three years spent as the baseball team’s head coach, he accumulated two state championships.

His career may have changed, but his unwavering desire to be successful remained constant. He joined State Farm Insurance and worked as an independent agent until he retired and moved home to the College Station area.

Regardless of his occupation or profession, J.B. remained a coach, mentor, and role model to all those he encountered.  Whether it be as a Sunday school teacher, a boy’s group leader at church, or a pitching coach on the mound, he inspired all those that were fortunate enough to have crossed his path.

In addition to being a coach and mentor, he was a disciple, father, and friend. His willingness to help others and his humility left others in awe.  It’s no surprise that his most memorable hours were spent coaching with the Special Olympics.

J.B. is preceded in death by his mother, Emily Ruth Carroll; his father, Charles George Carroll; and his brother, George.

He is survived by his son, Jay; daughter, Amy; his brother, Jim; granddaughters, Cameron and Avery; great granddaughter Josie; and nieces, Amanda “Mandi” and Jennifer.

The LORD is my shepherd; I shall not want. He maketh me to lie down in green pastures. He leadeth me beside the still waters. He restoreth my soul. He leadeth me in the paths of righteousness for his name's sake. Yea, though I walk through the valley of the shadow of death, I will fear no evil: for thou art with me; Thy rod and thy staff they comfort me.  Psalm 23:1-4

In lieu of flowers, donations can be made to Coach Blair Charities, a good friend and great cause!  https://www.coachblaircharities.com/

Memorial services will be posted at a later date.