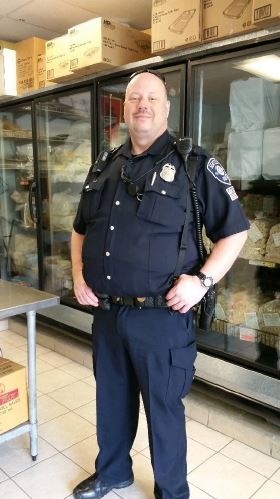 
John was born in August of 1967 in Seattle, Washington. He was the first of four kids, with 2 sisters, and a brother. He often took his oldest child responsibilities seriously and tried to keep the rest of us in line. He was rarely successful, but never stopped trying.

During his senior year of high school, he decided to join the Marine Corp Reserves and ended up serving for 6 years with a deployment to Saudi Arabia during the Gulf War in 1991. While serving in the reserves, John decided that he wanted to continue his service by joining the Seattle Police department. He was accepted as a candidate just prior to his unit being called to serve in the Gulf War.

He served for 5 months in Saudi Arabia and moved through the ranks quickly. When he came home, he was discharged as a Sergeant and was ready to begin his service as a Seattle Police Officer. Shortly after completing his training and probation period, John was promoted to a field training officer and really enjoyed working the night shift and working with the new officers. After several years of working the night shift, he decided he was ready for a change and moved to the daytime shift. He began to work with Seattle Housing Authority as a SPD officer. He became the contact for Community outreach issues, helped facilitate Community meetings, worked with the residents to reduce crime, and was a positive figure in the community. John was literally adopted by members of the East African Community. He would often bring his daughter, Rebecca, to work with him and enjoyed having her see him working and interacting with the people he saw everyday. Whenever Rebecca had not been with him for a while, he would often be asked how she and the rest of the family were doing and when they would see her again. In October 2020, John decided that he was ready to once again try something new. After 29 years with SPD, he retired. While the decision was a difficult one, he was looking forward to relaxing and enjoying time with his family. During his years with SPD, he worked with a lot of great co‐workers, community members, and friends.
In 1998, John met Elizabeth and they began to date. Elizabeth had two children, Sarah and Matthew, and John was a positive influence in their lives. When Rebecca came along in December of 1999, they were a complete family unit. The family would spend as much time together as possible with family game nights, school functions, and just getting out and spending time together. Some of their favorite activities were fishing, golfing, swimming, and other outdoor activities. Later, John and Liz got motorcycles and loved taking day rides, community rides, and weekend trips on their bikes.

John was also active in the Community. He was heavily involved in a youth fishing program called Cast for Kids. It brought kids out and taught them the joys of fishing. He also volunteered at different Elementary schools on the first day of school. He would greet the kids and help to start the new year with positive interactions with the kids. At the Community center, John would organize a pumpkin carving night for the kids. He also worked parades, community events, and was always willing to lend a hand for a worthy cause.

When not working for SPD, John would often work off duty. Some of his favorite work was at the Rolling Stones concert, Seattle Sounders and the Seattle Seahawks games. It combined his love of sports with policing. John also had a great love for dogs and animals of all kinds. The family always has a menagerie of pets, which currently include 4 dogs and 3 birds. All of the birds and dogs could often be found cheering on the Seahawks with him. John loved to meet people and could talk to anyone about anything. One year, John took Rebecca to meet JP Patches at a community event and ended up sitting with JP and Gertrude discussing life and their time in the Marines. Every year after, John would have to stop and speak with Gertrude. John also would meet people when he was traveling. He enjoyed visiting old battlefields and national parks and could often find a guide or police officer to stop and talk to. He had plans to do a lot of traveling, fishing, and enjoying life.

John will be remembered for his great love for his family, outstanding work in the community, and the many friends that he has found over the years.

To order memorial trees or send flowers to the family in memory of John Skommesa, please visit our flower store.