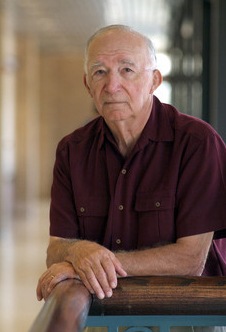 Dr. John Joseph Koldus III was born in Gary, Indiana to Helen Kukoy Koldus and John Joseph Koldus II. John excelled in many sports growing up and graduated from Gary's Lew Wallace High School where he lettered in football, basketball, baseball, and track. He was named Most Athletic Boy in the Gary School District. He then spent a year working at U.S. Steel on Lake Michigan as his father and other relatives had previously done. He realized an education was a way to improve himself and attended Arkansas State University in Jonesboro, Arkansas. He lettered three years in football, two in baseball, and was a Middleweight Golden Gloves Champion at ASU. John played in three Bowl games including the New Year's Day Tangerine Bowl. He was named Little All American by The Associated Press and held many individual football records for Arkansas State including most touchdown receptions in a season, most touchdown receptions in a career, most interceptions in bowl game, and most interceptions in a game.

Dr. Koldus received his bachelor's degree from ASU in 1953 and was then commissioned as a 2nd Lieutenant in the U.S. Army and served until 1955. While in the Army, John played both football and baseball for his Army units who played a collegiate schedule. One of his Army baseball teammates was Yankee player Billy Martin. John then coached and taught at Blytheville High School in Blytheville, Arkansas from 1955 until 1959. During the summers John attended the University of Arkansas in Fayetteville while completing his Master's degree and beginning his Doctorate.

A mutual friend introduced John to Mary Dell Hooker during the summer of 1957 at the University of Arkansas where their first date was a tennis match. Mary Dell was an exceptional amateur tennis player and she beat him regularly. That competitive athletic spirit between the two sparked a relationship that resulted in a 61-year marriage commencing May 31, 1958. Mary Dell had already received her Bachelor's and Masters from UofA.

In 1959 John accepted an offer from Bum Phillips, the future Houston Oilers head coach, to become his assistant football coach at Amarillo High School and head baseball coach where he remained until 1961. Also on the same staff was Jim Stanley, the future head coach of Oklahoma State. John and Mary Dell would move to Fayetteville from 1961 to 1963 to complete his Doctoral work. During this time, John taught a football class in the Phys Ed department which was well attended by the University of Arkansas football team. In 1963, Koldus accepted a position at East Texas State University in Commerce Texas where he eventually became Dean of Students and it was there he met J.L. Huffines who became a lifelong friend. Mr. Huffines is the major reason that John began his love affair with Texas A&M University. In 1973 he started his tenure at Texas A&M where remained Vice President of Student Services until 1993. In 1976 the Koldus family moved into the Former President's house on the Texas A&M campus at 100 Throckmorton. Texas A&M University held a special place in John and Mary Dell's hearts for the rest of their lives. Koldus wanted to make a positive difference in the lives of as many Texas A&M students and family members, former students, Aggie Mothers Clubs members, and Texas A&M faculty that he possibly could.

Dr. Koldus loved Texas A&M. He loved and appreciated the opportunity to serve Texas A&M. He and Mary Dell also loved all Texas A&M male and female sports teams. John and Mary Dell attended games years round until recently. In retirement, you could find John at Pebble Creek Golf Club daily. John caddied at the Gary Municipal golf course as a youth toting 2 bags and forming a lifelong passion. He enjoyed his daily morning rounds with all his friends who can attest that John wanted to remain competitive until his last round in 2017. If he was here today, he would say "Gig'em Aggies! I love Texas A&M and I love all of you."

A visitation will be held from 5-8 PM on Thursday, August 15 at Hillier Funeral Home of College Station. A Celebration of Life Service will begin at 11 AM on Friday, August 16, at Christ United Methodist Church of College Station followed by Aggie Honors and graveside services at the Aggie Field of Honor. A celebration reception will follow at the Aggie White House with parking encouraged in the Koldus Building Parking Garage.

To order memorial trees or send flowers to the family in memory of John Koldus, please visit our flower store.