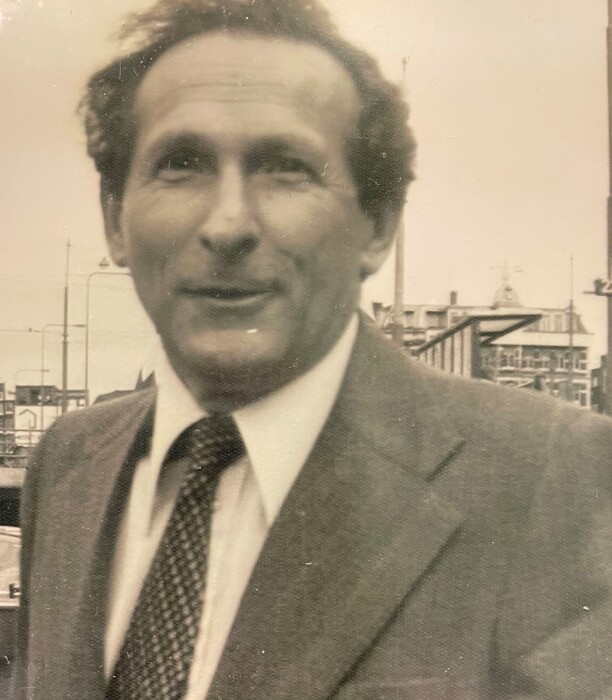 
"We shall not fail or falter. We shall not weaken or tire. Neither the sudden shock of battle nor the long-drawn trials of vigilance and exertion will wear us down. Give us the tools and we will finish the job."
-Winston Churchill

Dr. Jerzey Georgiades was born in the town of Drohobycz, Poland on April 18, 1928. His early years were spent with his sister Eva and his beloved dogs Tiki & Taki, exploring the meadows and lakes of his childhood. His idyllic childhood was shattered with the outbreak of WWII and the Russian invasion of Poland in 1939, followed by the Nazis. Having lost family to the Nazi tanks and Russian guns, Jerzey and his sister Eva became active in the Polish resistance movement. His bravery and dedication to freedom for the Polish people was best exemplified when he was a 14-year-old boy, giving a ride to two German soldiers on a hay wagon he was driving. Unbeknownst to the Germans, the wagon was full of a shipment of British arms under the hay. If he had been discovered, the consequences may have been dire; however, he prevailed in delivering the arms.

After the war, Communism took hold in Poland, causing significant distress and repression of freedom, as well as confiscation of family properties. Jerzey continued to better himself, despite the hardships, and he went to Medical School in Gdansk, Poland. Upon graduation and practicing as an Emergency Room Physician, he met the love of his life, his Princess, Izolda Maria Schroeder. They were married in 1960. Izolda said she was captivated by this good-looking young doctor who roared around town on his motorcycle. The following year, they welcomed their adored and only son, George Bogdan.

Jerzey was instrumental in developing a vaccination protocol and eventually eradicating Polio in Poland. For this profound accomplishment to the Polish people, Jerzey was awarded with the Polish Legion of Merit, the highest civilian recognition in Poland. The Government of Poland then sent Dr. Georgiades to Yale University to obtain his PhD in Tropical Medicine and Infectious Disease. Following the completion of this course of work at Yale in 1963, Jerzey joined the faculty of the University of Naples, Frederico II Medical School in Italy. This was a wonderful time for Dr. Georgiades, immersing himself in science and travelling and exploring Italy. In 1971, Jerzey was invited to becoming a Visiting Research Fellow at the M.D. Anderson Cancer Center in Houston. To join him in Houston, Izolda and their son George were forced to evade surveillance by the Polish Secret Police, escaping by steam ship, the "SS Dr. Lykes", and arrived in New Orleans.

Houston, and the Texas culture, agreed with Jerzey and his family. The M.D. Anderson position became full-time and was followed by a faculty position at University of Texas School of Medicine in Houston. In 1974, he took a sabbatical when the family returned to Europe and the Catholic University in Leuven, Belgium to be closer to his sister Eva during her battle with cancer. After Eva lost her battle, he returned to Texas and began a very enjoyable position, working with Drs. Howard Johnson and Sam Baron at the University of Texas Medical Branch in Galveston. He left academia in 1981 to start a company called Immuno Modulators Laboratories and several other companies in the US and in Britain. Jerzey was a world-renowned expert on Interferon Therapies and published in various scholarly journals and lectured around the world at numerous medical symposiums. His body of work, both in academic research and the private sector, will have an impact on the health of our world for generations to come.

As much as he was a man of science and medicine, he was an avid and accomplished sportsman and equestrian. Many happy hours were spent in the saddle with his son and hunting with his wife of 60 years. In his final years, Jerzey and Izolda moved to College Station to be closer to George and his wife Kelley, enjoying visits to their ranch in Millican, The Sycamore, to ride around the pastures and see their string of horses and herd of Brangus cattle. He got great joy of his time in the outdoors and was happiest during his time with them. But nothing could bring a smile to his face like his beloved grandchildren, Jake and Kate - they were his pride and joy!

He is preceded in death by his parents Mr. and Mrs. Jorgos Stavros Georgiades and his beloved sister, Eva Georgiades May, as well as many other extended relatives who perished in the Soviet invasion. He is survived by his beloved wife of 60 years, Izolda M. Georgiades, his son George and daughter-in-law Kelley Sullivan Georgiades, his adored grandchildren Jake and Kate Georgiades and the mother of his grandchildren, Molly C. Georgiades. He is also survived by special family friends Clint and Danya Bogart and their daughters, Mimi and Clare.

A private Polish Funeral Mass will be held on Friday, June 11th at St. Stanislaus Catholic Church in Anderson.

Education is what charted the path for Jerzey's life. Therefore, the family has asked that, in lieu of flowers, memorials be made to The Georgiades Family Scholarship at the Texas A&M Foundation ( http://give.am/GeorgiadesScholarship) or a charity of your choice.

To order memorial trees or send flowers to the family in memory of Jerzy A Georgiades, M.D., Ph.D., please visit our flower store.