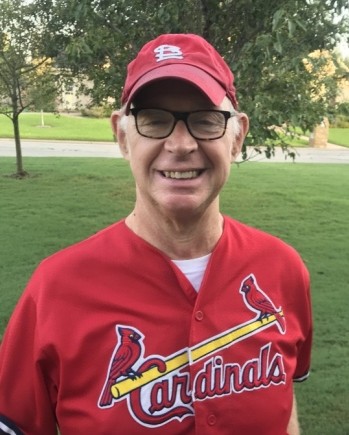 Fellowship of Family and Friends

Jerry David Powell, known to family and friends as "Boog," 63, of College Station, passed away on Sunday, May 31, 2020.
Jerry was born on November 9, 1956, in Oelwein, Iowa, to his parents, Adrian Robert Powell, the town's doctor, and Leonie Edith Powell, a registered nurse. His dad doted on him and often took him "on rounds" at the hospital. Jerry spent his entire childhood in Elkader, Iowa, with his seven siblings, Jim, John, Jeff, Jean, Jay, Jane, and Mary Ann. They all teased him, but were very protective at the same time. Growing up in Elkader, Jerry grew up in small town America in a by-gone era where the entire "village" looked out for its own. He was big, red-headed, mild-mannered, and loved sports, especially baseball. He was one of the "most-loved" in his hometown, known as "Jerr-bear" or affectionately called "Boog," after a well-known baseball player from long ago. Jerry's good nature and good humor were legendary.

Jerry attended St. Joseph Catholic School and then Central Community High School. Although Jerry preferred to be playing sports than studying, his high school French teacher took a particular interest in Jerry, and he majored in French, graduating from Upper Iowa University. He eventually moved to Texas over 30 years ago, and earned a second degree in Finance. Although very diligent in school, school was not where he excelled. Instead, it was his knowledge of sports, including sports statistics of all kinds. Jerry's favorite teams include the St. Louis Cardinals for baseball, Green Bay Packers for professional football, and Notre Dame for college football. He played baseball in various leagues over the years.

Jerry was never married, but he attracted people of all sorts. He would keep friendships for decades, faithfully staying in contact by writing letters, calling, texting, and sending things of interest to people. Jerry had development problems incurred at birth, but he was strong and didn't let this stop him from living his life. Doctors were amazed at his adaptability and the fact that he was essentially independent. He required oversite by a loving adult, which his siblings didn't mind doing! First this was his oldest brother, Jim, and for a few years, his brother, Jay, but for most of his adulthood, it was his sister, Mary Ann. Jerry helped his sister, Mary Ann, raise her son and daughter, Jay and Liz. Being in the restaurant business allowed him the flexibility to pick them up from school and take them to their extracurricular activities. They often convinced Jerry to stop at convenience stores for candy! He was a big part of their lives, and loved them like they were his own children.

Jerry was a gentle soul, generous, trusting, funny, and thoughtful of others. He was the ultimate "people person." An eternal optimist, Jerry got over life's lumps with a deftness worthy of the envy of most. Family and friends were the most important things to Jerry. Next to family and friends, his work in the food industry was extremely important to him. He worked for many years at Red Lobster in the Back of the House. It was his passion. His work ethic was legendary! A dedicated employee, he could be counted on to help in a moment's notice if asked, even on his days off. He once left the movie theatre mid-movie to go help out at work. He loved his co-workers and their playful banter, they all looked out for him.

Although he was extremely dedicated to his work, he protected his bowling nights! Jerry was very active in his bowling league Tuesday nights in College Station. He loved his league, and they were always there for Jerry. When Jerry fell ill, his co-bowlers purchased him a lighter ball so he could still bowl, and when his condition worsened, they gifted him with an even lighter ball! Jerry was involved in the community in Bryan-College Station, as well as Elkader. Jerry participated in the Polar Bear Club at the Bryan Aquatic Center, often swimming the most distance in a season. While in Elkader, Jerry volunteered to serve meals at the Senior Center. The Iowa governor personally handed him an award for public service.

Jerry was raised catholic, and maintained his faith throughout his life.

Jerry enjoyed everything that had anything to do with family! He loved going on trips with everyone, including their annual trips to Chicago and South Padre. Christmas was his favorite holiday. Jerry and his brother, Jeff, were both tone deaf and loved to sing various Christmas carols in hilarious fashion! Of course, Jerry loved watching sports of all kinds, but he was also a savant when it came to sudokus. Jerry loved people, family and friends meant the world to Jerry. Jerry was not a material guy, objects and money just didn't mean a lot to him, relationships are what mattered to Jerry. People will remember what a unique, complete, and good person Jerry was, and he will be missed by his family, friends, and all that knew him.

Jerry is preceded in death by his parents, Adrian Robert Powell and Leonie Edith Powell; his brother, Jim Powell; his sister, Jane Ebel, and his brother-in-law, Bob Pruett.

He will be remembered by his siblings, Johnny Powell, Jeff Powell, Jean Pavlakis, Jay Powell, and Mary Ann Powell; Mary Ann's family, husband Chris, and children, Jay T and Liz, who were very important people in his life; numerous nieces and nephews; and as well as half of East Texas.

An informal visitation will be held from 12-1 pm, on Saturday, June 13th, at Hillier Funeral Home of COLLEGE STATION. A formal service will follow, beginning at 1 pm, at the funeral home. If you are unable to attend the service, there will be a live stream available through the tribute page.


To order memorial trees or send flowers to the family in memory of Jerry "Boog" Powell, please visit our flower store.

Fellowship of Family and Friends