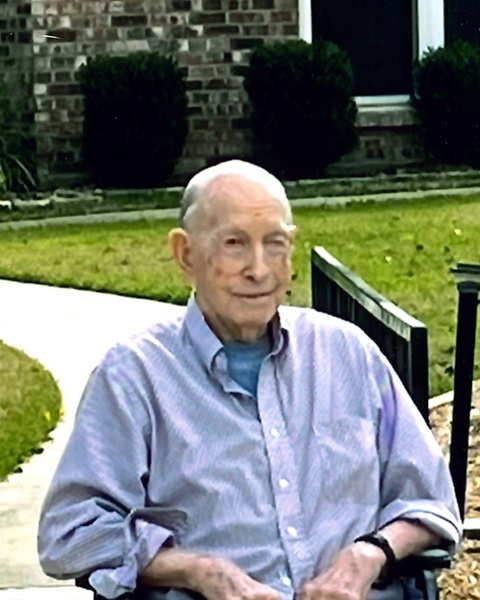 Jennings Winston Elliott (known as “Red” to his friends) passed away on Monday, September 26, 2022. He was 96 years old. He was born on July 27, 1926 to Roy and Winnie Elliott in Mountain View, Arkansas and grew up in poverty on a small South Texas farm during the Great Depression.

He enlisted in the Navy during World War II and served in the South Pacific and the Philippine Islands as a photographer in Combat Air Service Unit F39.1. He had just turned 19 when the war ended.

After the war, he went to work for Schlumberger and was employed there for over 38 years. He spent 4 years in Geophysical Exploration field crew working in the Texas panhandle, North Dakota, Wyoming, West Texas , offshore out of Galveston, on and around Lake Maracaibo in Venezuela and offshore out of Grand Isle and Venice, Louisiana.

In 1951, he transferred to the Schlumberger Research Center in Ridgefield, Connecticut. Soon after that he met Emma Rider and the two of them were married in 1952. They initially lived in south Louisiana (where he was on a temporary assignment), then moved back to Connecticut at the end of 1952, where their son Robert was born in 1953.

He spent the remainder of his career at Schlumberger at research centers in Ridgefield (until 1970), Houston (until 1983) and Austin (until 1987).  His work involved developing digital electronic systems which recorded well log data on photographic film and was granted 8 patents for these systems over the course of his career.

Although he enjoyed designing complex digital systems, he always had fond memories of the years of field work early in his career. He felt that life on a Geophysical Exploration crew was a great experience for adventurous young single people.

He retired from Schlumberger in 1987 and he and his wife moved to College Station, which they had developed a fondness for when their son Robert was studying at Texas A&M. He and his wife attended every Texas A&M home football game from 1975 to 2006, rain or shine, in heat or cold.

In retirement he continued to stay busy with do-it-yourself projects around the house and the yard – especially anything that he could use his Kuboda diesel tractor with front end loader on. He also enjoyed gardening, pets (cats and dogs), and cooking.

After his wife Emma suffered a stroke in 2007, he supported and cared for her and progressively took on responsibility for household tasks that she could no longer perform.

Late in life, he said that he felt fortunate

He was preceded in death by his wife of 67 years, Emma; his parents; brothers, Kenneth and Glenn; and sister, Thelma Ruth Kelley. He is survived by his son, Robert Elliott of Houston.

Funeral services will be private and there will not be a memorial service. In lieu of flowers, please make a contribution to the Aggieland Humans Society. Anyone wishing to celebrate Jennings Elliott’s life is encouraged to lift a glass and salute all of those who were children during the Great Depression and young adults during World War II. He was a proud member of this rapidly diminishing group.