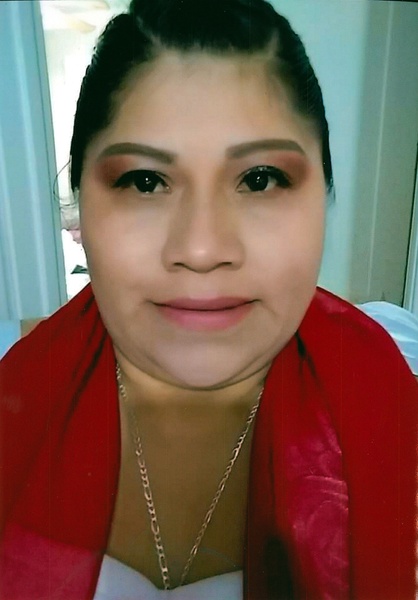 Ignacia, a strong woman in her faith, was born on July 31, 1972, in Ahuehueco, Tepehuacan de Guerrero, Hidalgo, to her parents, Lino Valencia and Placida Salinas. Ignacia has always been a hard worker, even in her younger years. She worked at many jobs, and at the age of 18 she was able to rent an apartment for her mom, who was a very special person to her. Ignacia worked in the cleaning services industry for houses, buildings, and construction sites. She was always prepared with her supplies; she even had a special belt that held all her bottles, rags, and other supplies.

Ignacia loved her daughter, Isabel Martinez-Valencia, with all she had. She loved being a mother; the day Isabel was born was the greatest and proudest day in her life. She worked hard to give Isabel everything she deserved. Family was always an important aspect of Ignacia's life. She loved being a part of family gatherings, especially holidays.

Ignacia grew up in a catholic church. She believed in both God and Saints. She also has a certain spot where all her candles, flowers, and sculptures of Saints are in her home. Ignacia was a religious person who attended church regularly. Her faith was an important part of who she was as a person; she was strong in her faith. Ignacia was a courageous, brave, and encouraging woman. Her strength is a trait that has been passed on to others; especially her strength throughout her battle with cancer. She is blessed to be at peace with her Lord and Savior now. "Animo, animo, cheer up, cheer up," Ignacia is resting with her Lord now.

Ignacia has been reunited with her parents, Lino Valencia and Placida Salinas, and Besie Lopez, Gilberta Martinez, and Gollito Salinas.

Visitation will be held from 5-7 pm, with a Rosary to begin at 7 pm, on Tuesday, December 29th, at Hillier of BRYAN. A Mass of Christian Burial will begin at 11 am, on Wednesday, December 30th, at Santa Teresa Catholic Church. A Committal Service will follow at Mount Calvary Catholic Cemetery.

The family would like to thank the kind and sincere work of Hospice Brazos Valley and Santa Teresa Catholic Church.

To order memorial trees or send flowers to the family in memory of Ignacia Valencia, please visit our flower store.