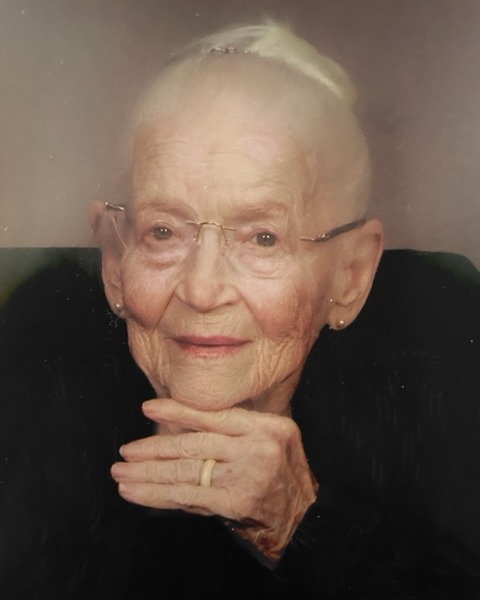 Evelyn was born in Brenham, Texas to Ewald and Hildegard (Steinbach) Tiaden. Evelyn was the eldest of two children in the family, her younger brother John arriving three years later.

In 1949, while attending Blinn College in Brenham, Evelyn began dating a handsome young graduate of Texas A&M University, Edward Fred Kruse. Evelyn had planned to start nursing school in Galveston, Texas, but postponed her schooling for a year to see how things would go with her new sweetheart. As things went very well, they were married the following June at St. Paul’s Evangelical Lutheran Church in Brenham. Their marriage lasted until Ed Kruse died in 2015.

After living in Fort Worth, Texas for a short time, the young couple returned to Brenham where Ed took a job as job as a route supervisor with Blue Bell Creameries. Their first child, Karen, was born in 1951, followed by sons Ken in 1953, Paul in 1954, and Neil in 1958.  While Ed Kruse worked to help build Blue Bell, Evelyn ran their home as an excellent mother, homemaker, cook, seamstress, and gardener. The family enjoyed vacations, camping, and fishing trips in many parts of the United States, and later Ed and Evelyn enjoyed trips with their close friends to destinations outside the U.S., as well as fishing and hunting trips with their children and grandchildren.

Evelyn was an active member of St. Paul’s Lutheran Church in Brenham and enjoyed being part of the Ladies’ Aid Society and Women’s Circle. She was a close friend of former first-lady, Barbara Bush, and helped create the Rose Garden on the grounds of the President George H. W. Bush Library in College Station, Texas. After Ed’s death, Evelyn moved to College Station in order to be closer to her daughter Karen who provided excellent care of Evelyn for the rest of her life.  Evelyn’s faith in her Lord and Savior, Jesus Christ, was obvious to everyone she met, including those at Bethel Evangelical Lutheran Church of Bryan, Texas where she was a member.

She was predeceased by her sons, Ken Eddie Kruse and Neil Howard Kruse.

We will all miss Evelyn’s wonderful sense of humor, generosity, and delicious dewberry preserves!

To order memorial trees or send flowers to the family in memory of Evelyn Delores Tiaden Kruse, please visit our flower store.