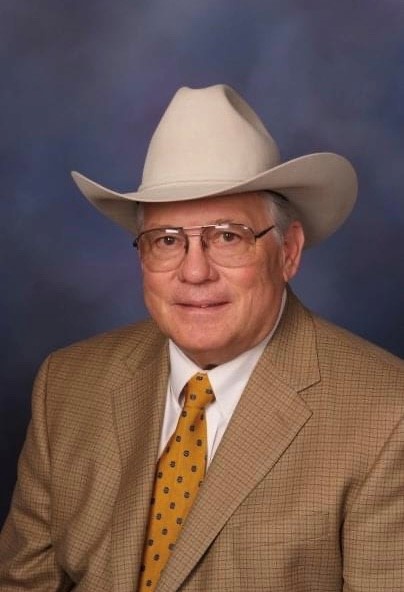 Ernie Davis was born on June 4, 1940, in Brownwood, Texas, to his parents, Ed and Tylene Davis. As a young boy, he grew up on the family stock farm, where his love for livestock began. He was active in 4-H, Boy Scouts, and Church Youth Fellowship, and raised and exhibited steers and lambs in major livestock shows and fairs. In Boy Scouts, Ernie earned the rank of Eagle Scout with the Bronze, Silver, and Gold Palms. Ernie graduated from Brownwood high school in 1958, where he participated on the football and golf teams. After receiving his Bachelor's degree in Animal Husbandry from Oklahoma State University in 1962, he began his career as a Junior Assistant County Agent in Training in Comanche County, Texas. He then reported to Fort Hood, Texas, to serve his country as a commissioned Second Lieutenant in the US Army. After rising to position of Captain in the Army and completing his military commitment, he returned to the Texas Agricultural Extension Service as an Assistant County Agent in Jefferson County, Texas. In 1967, Ernie came to Texas A&M University as the Extensions Assistant in livestock marketing. During his time at Texas A&M, he earned his Master's in 1971 and his PhD in 1975, both in Agricultural Economics, from Texas A&M University. In 1972, he became the department's Extension Livestock Marketing Economist.

Although Ernie did not have an "official" teaching appointment, Ernie enjoyed working with and mentoring students while at Texas A&M. He served on numerous graduate student committees, and was a frequent guest lecturer in both graduate and undergraduate classes in the Departments of Agricultural Economics and Animal Science. When Ernie retired from the Texas A&M University system in 2004, he and his wife, Marilyn, established an endowed scholarship dedicated for students in the Department of Agricultural Economics and Agribusiness.

Ernie stayed involved with his community, serving as President and Zone Chairman of the College Station Morning Lions Club, serving as Trustee for 14 years on the Texas 4-H Youth Development Foundation, and he had always been very involved with the Houston Livestock Show and Rodeo. He became a member of the show in 1991, he served All Breeds and International Committees, serving as Chairman, Junior Commercial Steer, and continued to serve as a Lifelong Member and Lifelong Director.

During his time with the Houston Livestock Show and Rodeo, Ernie was blessed to meet Marilyn. They married and enjoyed 24 beautiful years together. With four children, Elaine, Reed, Roger, and Ryan, Ernie was a family man by all accounts. He was also a Christian man, one who was a devoted follower of our Savior, Jesus Christ. After retirement, Marilyn and Ernie retired to Praha, Texas, and formed Mullberry Hill Cattle Ranch.

Ernie enjoyed ranching, hunting, playing golf, rodeos, and sports, especially his Aggie sports! He found joy in his work, especially working with and being a resource for ranchers across Texas. When he wasn't ranching or working with livestock, you could find Ernie sipping on a glass of Canadian Club whiskey.

Ernie is reunited in heaven with his parents, Ed and Tylene Davis; and parents-in-law, Howard "Red" and Marilyn Moore.

In lieu of flowers, the family requests that memorial donations be mailed to the Department of Agricultural Economics, c/o Dona Chester, 600 John Kimbrough Blvd. Ste#214, College Station, TX 77843-2124. Checks should be made out to the Texas A&M Foundation and please designate gifts to the Dr. Ernest E. "Ernie" Davis '71 Endowed Scholarship in Agricultural Economics, Acct. no. 34687 in the memo line of the check. These funds will be used to support a student scholarship in memory of Ernie.

To order memorial trees or send flowers to the family in memory of Dr. Ernest Davis, please visit our flower store.