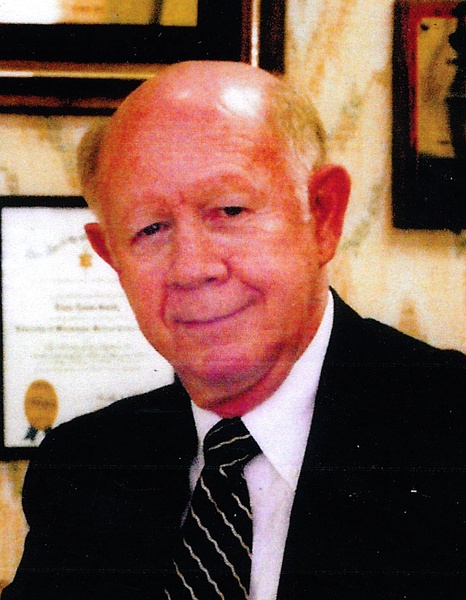 On Saturday, June 5, 2021, the family of Elvin Estus Smith will host a celebration of Dr. Smith's life. The celebration will take place at First Baptist Church College Station located at 2300 Welsh Avenue in College Station, TX at 2:00 PM.

Dr. Smith was preceded in death by his parents Elvin Sr. and Ellen Locke Smith of Hattiesburg, Mississippi and his in-laws Thomas and Ruby Coward of Noxapater, Mississippi. He is survived by his wife of 60 years Mary Irma Coward Smith, his sons Elvin Smith III (and wife Rebecca) of Dallas, Texas and Forrest Smith of Cincinnati, Ohio, grandson Elvin Smith IV, his brother James Edward Smith and wife Bobbye Smith of Hattiesburg, Mississippi and sister Edith Ellen Coulter of Tallahassee, Florida, Brother-In-Law and Sister-In-Law, John and Nona Young of Noxapater, Mississippi, 4 nieces and 5 nephews as well as many friends around the world.

A native of Hattiesburg, Mississippi, he graduated from Hattiesburg High School in 1957 and entered the Army through the "Buddy Plan", a 6-month commitment of intense training followed by a period of service in the National Guard.

From 1960 - 1964, Elvin was a Pre-Doctoral Fellow in the Department of Physiology and Bio-Physics, earning his PhD. from the University of Mississippi Medical Center in 1964. Upon graduation he joined the faculty of the University of Mississippi Medical School where he worked with many nationally renowned leaders in the medical field. Being a cardiac physiologist by training, he worked in the Physiology Department chaired by Dr. Aurthur Guyton who wrote the Medical Physiology Textbook used by most medical schools at the time. He conducted research, taught and published over 80 articles, and was awarded numerous grants from the National Institutes of Health. He served on the editorial boards for the American Journal of Physiology and the Journal of Applied Physiology. He attained the rank of Professor of Physiology.

In 1975, Dr. Smith was recruited to assist with the formation of a new medical program being developed by Texas A&M University in conjunction with the Veterans Administration and others.
Being a visionary and recognizing the opportunity to be part of developing (potentially) a world class medical school associated with a recognized academic institution, he quickly accepted the challenge.

He was the founding Head of the Texas A&M University College of Medical Physiology. He established an outstanding department whose faculty through the Micro Circulation Institute gained International recognition.

Upon the departure of the founding Dean of the Medical School, Dr. Smith transitioned into the role of acting Dean from September 1, 1977 to July 15, 1978 when a permanent Dean was hired.

Dr. Smith played a major role in laying the foundation for the TAMU Medical Complex as it exists today. While the TAMU Medical Programs often partnered with private institutions, Dr. Smith's guiding principle was to always put the interest of Texas A&M University and the people of the State of Texas first.

In recognition of Dr. Smith's service to the TAMU System, the TAMU Board of Regents issued the following proclamation upon his retirement:

Resolution
Board of Regents
The Texas A&M University System

WHEREAS Dr. Smith has tirelessly promoted health professional education in Texas and for the overall health and well being of Texans for the past 30 years; now, therefore, be it

RESOLVED, that the Board of Regents of the Texas A&M University System gratefully recognizes the dedication and service of Dr. Elvin E. Smith as a Professor of Medicine and distinguished leader within the Health Science Center; and be it, further

One of Dr. Smith's greatest professional satisfactions arose from his guidance of TAMU through the medical school accreditation process that hung in the balance as its first class of students were scheduled to begin classes in the fall of 1977, and that first class' subsequent performance. All 32 members of the first class successfully completed their medical degrees in four (4) years. They also all passed their Federation Licensing Exam (FLEX) and posted the highest grades in the State of Texas; thus, eliminating any concerns about whether the school would survive and thrive.

Elvin's contributions were not limited to the institutions of his employment but extended to the greater community.

He served on the Governor's Commission on Physical Fitness (Texas), the National Aeronautics and Space Administration task force for re-entry countermeasures, and the Texas Higher Education Coordinating Board, Health Science Center Advisory committee. He also once advised the Texas A&M coaching staff on the proper preparation and logistics for optimal performance in college football games at elevation in preparation for A&M's game against the University of Colorado (in Boulder).

Additionally, Dr. Smith thoroughly enjoyed teaching the Bible to his Sunday School class at First Baptist College Station for more than 40 years. In preparing for his lessons, Dr. Smith did not just study the text of the Bible or a prepared lesson plan, he also devoured respected Bible commentaries and the most relevant historical texts from the pertinent time periods to add depth and context to his lessons. This came naturally for Dr. Smith as he was a voracious reader.

Perhaps the most enjoyable and rewarding group Dr. Smith worked with was the "Chain Saw Gang"; a group of men, retired professionals, who did pro-bono work for Habitat for Humanity especially enjoying opportunities to put their chainsaw skills to work.

Dr. Smith was also a devoted family man. He shared many wonderful hunting and fishing trips with his boys and attended many of their sporting contests even serving as a coach from time to time. He and Irma spent countless hours first taking and then following the boys all over the country as they pursued their dreams of competitive shooting. Later in life, Dr. Smith took up bike riding (giving up his running habit). That pursuit turned into an informal family reunion as he talked his sons and brother in to participating with him every August for the Hotter-N-Hell 100 bike ride in Wichita Falls. Dr. Smith's sister and everyone's respective families would also join in for the occasion. Dr. Smith finished the 100-mile course several times in his 50's, 60's, and 70's. After Dr. Smith's retirement, he and Irma travelled extensively in their Ford Excursion (The Tank) driving to and touring every U.S. Presidential Library and almost every U.S. National Park while lodging at numerous historical hotels along the way.

Dr. Smith's many stories (he was an epic story teller) and stories about Dr. Smith will long be fondly remembered by those who had the blessing of knowing him. His lessons and example will guide his family, friends, and former students for years to come.

To order memorial trees or send flowers to the family in memory of Elvin Smith, please visit our flower store.