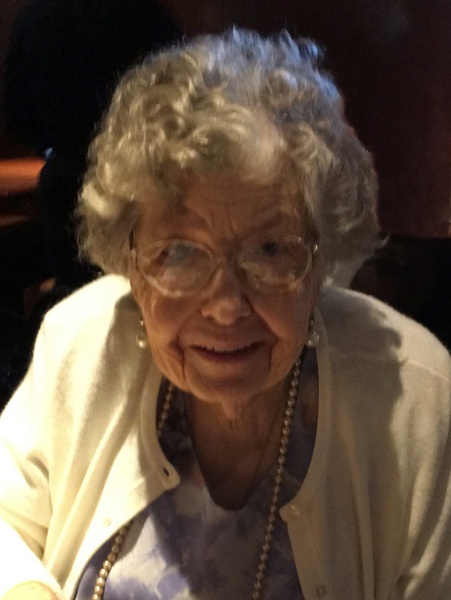 Elaine Vance died on July 17, 2020, at Crestview Senior Living Community of COVID-19 at the age of 96. She was a descendant of businessmen, artists, musicians, and professional athletes who were part of families that immigrated to Manitowoc, Wisconsin, from Germany and Czechoslovakia in the late 1840's and early 1850's, shortly after Wisconsin became a state. Her paternal great-grandfather was a farmer and owned a herd of dairy cattle. Her maternal great-grandfather owned a shoe factory, tannery, and woolen mill. She had an idyllic childhood, spending holidays with her extended family, summers filled with camping and fishing on Shawano Lake, and winters ice skating when her father returned home from work as the chief cost accountant at Mirro Aluminum Company. When she wasn't spending time with family and friends as a Girl Scout or Job's Daughter or taking piano or dancing lessons, her greatest love was reading, especially anything to do with history.

In 1942, Elaine graduated with valedictorian honors from Lincoln High School in Manitowoc, and was the last of the Round Robins, a group of eight high school friends who shared their lives through packets of letters sent for over 70 years. She went on to Columbia School of Nursing in Milwaukee, affiliated with Carroll College, and spent her first two summers interning at Cook General Hospital in Chicago. In 1945, she volunteered to serve as an Army Corps cadet nurse at Hammond General Hospital in Modesto, CA. During this short period of seven months, she met her husband, Captain James E. "Monk" Vance, who was a patient at the hospital after being injured in North Africa. After her AWVS Nurse Corps service ended, she returned to Manitowoc and graduated from nursing school as a Registered Nurse. Monk sent her engagement ring to her in the mail for Christmas, and they were married on April 27, 1946.

Monk and Elaine's month-long honeymoon consisted of travel from the Great Lakes to Galveston, and they settled in Marshall, TX, where Monk was an assistant county agent. Although Elaine had never set foot in Texas before her marriage, she loved her southern family and enjoyed many happy times celebrating birthdays and holidays, church activities, and family reunions with Monk's vast number of relatives, descendants of Andrew McWhorter who had settled in Grimes County near Bedias in 1842.

After short stays in Marshall, Paris, and Beaumont, Elaine and Monk moved to College Station in 1953, where Monk worked for the Texas Agricultural Extension Service. Except for a 17-year stint in Fort Worth where Monk worked as the Ranch and Farm Editor for the Fort Worth Star Telegram, Elaine spent the rest of her life in Bryan. While her children were growing up, she served as a Cub Scout den mother, Campfire Girls' leader, and elementary Sunday school and Vacation Bible School teacher for many years. She joined Beta Sigma Phi Sorority in 1950, serving as chapter president, and was appointed to the Beaumont City Council in 1950. She started attending A&M football and basketball games in 1946, and never gave up cheering for the Aggies until 2013, when she could no longer maneuver stadium stairs.

Upon her return to Bryan from Fort Worth in 1976, Elaine joined many organizations including the TAMU Social Club, TAMU Newcomer's Club, Republican Women of the Brazos Valley, TAMU Extension Service Club, Heritage Society, and the TAMU Retirees Association. She delivered Meals on Wheels once a week for many years and volunteered at the Brazos Church Pantry for over 20 years and served on the board. In addition, she was a life member of the Bryan Woman's Club. She was a passionate bridge player her entire adult life and belonged to several clubs. Later in life, she picked up Mah Jongg as well. When water exercise classes became popular, she joined and participated until she was 92. She also enjoyed piecing quilts, knitting, and counted cross-stitch. She held season tickets to OPAS from 1976 until she could no longer drive at night and rarely missed a good historical or musical movie. She introduced her children and grandchildren to art museums and live theatrical and musical performances, taking her oldest grandchild to animated movies when she was five, sparking her artistic interest in film production as a student and in her ongoing career.

When Elaine was growing up, she spent a lot of time with her Grandmother Krainik who taught her how to bake all kinds of breads and sweet confections. For more than 35 years after she married, Elaine spent weeks before Christmas baking 20 different kinds of cookies and sharing them with family, neighbors, friends, and even the mailman and garbage collector. She even wrote and distributed a cookbook of her favorite cookie recipes.

All of her life Elaine was a voracious reader, and she was a great supporter of the Bryan Library. She was a life member of the Friends of the Library and served on the board in all positions for over 35 years. She was also appointed to the City of Bryan Library Advisory Board in 1988 and served as president several times. One of her greatest joys was the vast amount of time she spent culling the books in the library basement in anticipation of the next book sale. Over a period of 35 years, she helped raise several hundred thousand dollars for the libraries including the $75,000 insurance deductible needed when a fire set by an arsonist almost destroyed the Bryan Library in 1995 - but by far her greatest achievement came when she spearheaded the restoration of the Carnegie Library in 1997. The Carnegie was one of the places she visited most often when she was a young wife and mother and hated to see its decay once the new library was opened across the railroad tracks in 1968 and later remodeled after the fire. She went to the librarian, Clara Mounce, and together they received a $50,000 grant from the railroad. The City of Bryan contributed the remainder of the funds (about $40,000) needed to complete the project, and Elaine chaired the Carnegie Restoration Committee in rehabilitating the beautiful structure as it stands today. For her efforts she received an award from Barbara Bush and the Bush Library.

Elaine was a member of First Baptist Church of College Station for most of her married life and served as treasurer of Discovery, a program for wives of TAMU international students, for over 20 years. Also, while at First Baptist, she served as president of the Women's Missionary Union. Several years after Monk died, Elaine went back to the religion of her youth and joined the First Presbyterian Church in Bryan where she served as an elder and deacon. As a registered nurse, Elaine volunteered countless hours to the American Red Cross Blood Drives and also her particular favorite, the Pre-Natal Clinic of Bryan where she also served on the board for over 20 years. She was a "You're The TOPS" awardee as well as the first recipient of the Friends of the Clinic Volunteer Award.

Elaine loved to travel, especially to places of historical significance. Her middle name was "go," and she traveled with her husband whenever possible to places all over the world. When he died in 1987, she traveled with her children, grandchildren, friends, and First Baptist College Station church members on tours led by Dr. Malcolm Bane. But she always said that her favorite destination was San Francisco and the St. Francis Hotel.

Those who preceded her in death include her parents William Louis and Caroline Vollendorf Krainik, her husband Monk, one sister Carol Krainik Houghton, and her son-in-law Dr. Dennis Edgerley. She is survived by her son William Webb Vance and his wife Vanita, her daughter Pam Vance Edgerley, one sister Marjorie Krainik Motz, and four grandchildren: Austin Bonham Vance of College Station, Caroline Elizabeth Vance of Tyler, Erika Elaine Edgerley Robbins of Los Angeles, and Eryanne Etta Edgerley also of Los Angeles.

There will be no funeral or memorial service. Since nursing school, Elaine always had the desire to will her body to science, but since she died of COVID that will not be possible. She will be buried next to her husband in Concord Cemetery near Bedias. In lieu of flowers or food, please consider giving a gift to her two favorite charities: Friends of the Library or the Pre-Natal Clinic.

Heartfelt gratitude goes to Sandra, Georgia, Cassandra, and Victor at Crestview Memory Care for the special attention they gave Elaine through the last years of her life when disease had robbed her of her brilliant mind, and also those in Crestview Skilled Nursing, especially Lauren, who cared for her after she was diagnosed with the virus. Elaine would be the first to say that she lived a long and happy life and had everything she ever wanted and more. The words "organized" and "disciplined" cannot even begin to define how she operated and accomplished so much. She always spoke her mind, gave her opinion, and never backed down from what she believed to be true, yet she lived a life of selfless service to others and her community and left this world far better off than she found it.

To order memorial trees or send flowers to the family in memory of Elaine Vance, please visit our flower store.