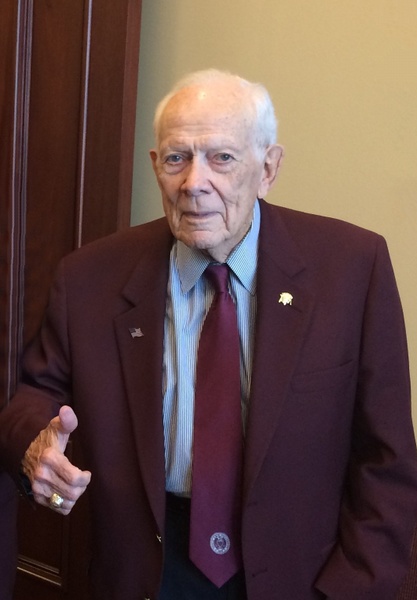 Edward lived a life full of love for his family, country, and university. He was born January 14, 1925, in Galveston, Texas, where he married his high school sweetheart, Jean Elizabeth Gordon, at The First Presbyterian Church of Galveston on January 1, 1945. In 1942, Edward enrolled at the A&M College of Texas to study engineering. In 1943, he was drafted to serve in World War II, and entered the Army as a private. His military proficiency from his time at A&M was recognized, and he was sent to officer candidate school after basic training. In 1945, he was deployed to Manila, Philippines as a Second Lieutenant in the Army Corps of Engineers. While stationed there, he was promoted to First Lieutenant.

In 1946, he and a group of Aggies commandeered a small landing craft and a few motor-powered boats to carry them to the Island of Corregidor, where he participated in the 1946 Aggie Muster that paid tribute to the ceremony during the siege of Corregidor in 1942. He can be seen in the famous 1946 photograph as the third man below the second "G" in "Aggie."

Edward graduated from A&M College of Texas in 1949, with a degree in Management Engineering. Before he was drafted, Edward was a member of Battery D in the Corps of Cadets, but after his military service was finished, he finished his degree, no longer a member of the Corps of Cadets. As such, he was never afforded the opportunity to wear senior boots. His son Gordon had both his and Edward's name inscribed in his senior boots as a token of Gordon's appreciation and a tribute to Edward's service.

After his service in the military, Edward worked in different capacities as an engineer. Later in his career, he joined Jean in the management of a successful employment agency in Houston, Texas.

Edward and his wife Jean moved permanently to College Station in 1993, where they embraced their role as extraordinary and loving grandparents. Known as "Pop" and "Hunny," they spent their golden years just three doors down from their youngest son, Gordon, and Gordon's six children. Edward and Jean hosted many family events and gatherings at their home in College Station. They also lent out their spare bedrooms to grandkids and in-laws who were studying at Texas A&M. Their hospitality and love were unmatched, and the support they provided to their family has had a tremendous impact.

On January 1, 2005, Edward and Jean celebrated their 60th wedding anniversary with their children, grandchildren, and great-grandchildren at a surprise luncheon that was attended by many. Before their passing, Edward and Jean were recognized as having the longest marriage of any Aggie of the Class of 1946. In 2016, The Association of Former Students presented Edward with the Core Values Coin, a small, rare gift that recognizes Aggies who live and reflect the core values of Texas A&M. At the time of his death, he was one of 123 Aggies to receive this recognition.

Jean passed away in 2009, and Edward continued to live independently in his home until the age of 94. Edward enjoyed attending nearly every Aggie home football game, many baseball games, and many MSC Opas performances during his time in College Station. Until a few years ago, he was a regular participant at the St. Joseph Rehabilitation Wellness gym where he formed close friendships with staff and attendees.

Edward is preceded in death by his wife of 64 years, Jean Elizabeth Gordon Mitchell; his eldest son and daughter-in-law, Edward "Chip" H. Mitchell III and Barbara L. Mitchell; his grandson Weston M. Mitchell; and his grandson-in-law Matthew Reyna '03. He is survived by his only daughter, Linda Quin of College Station; his son and daughter-in-law Dr. Gordon G. Mitchell '77 and Holly L. Mitchell of College Station; grandchildren Andrea Mitchell Reyna '94 and Corey Mitchell '01; grandchildren Cynthia, Kimberly and Michael Quin; grandchildren Lauren Mitchell Landivar, Kristen G. Mitchell '06, Gordon G. Mitchell, Jr., Stefon E. Mitchell, and Aaron S. Mitchell '16, '19; eight great-grandchildren; one great-great-grandchild; and numerous nieces, nephews, and other relatives.
Edward was and the family is extremely grateful to the caregivers that helped care for Edward over the years, especially Tammie Hines, Annette Shelton, and the staff of St. Joseph Manor. Tammie was instrumental in helping him to stay in his home for such a long time, and Annette kept him connected nightly to his family during the pandemic. The family is forever grateful for their compassionate care.

Visitation will begin Saturday, December 5 at 12:30 p.m. at the Aggie Field of Honor Chapel. Aggie Honors Funeral Service will be at 1:30 p.m. with Graveside and Final Military Honors to follow at the Aggie Field of Honor on 3800 Raymond Stotzer Parkway, College Station, Texas. The Chapel will be open-air and social distancing will be observed. Masks will be required.

Memorial contributions are encouraged to be made to the Texas A&M Corps of Cadets.

To order memorial trees or send flowers to the family in memory of Edward Mitchell, please visit our flower store.