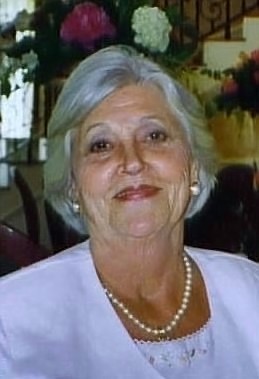 
Dorothy Faye Carlyle was born on July 24, 1932, in Stoneham, Texas, to Pricey P. and Eula Patterson. She was the middle child of five who grew up living around Dyer's Mill where her father helped operate the saw mill. She passed from this life on January 2, 2021, at the age of 88, from complications of Alzheimer's and COVID 19 in Bryan, Texas.

Her life was spent at the center of every activity: Cub Scout leader, PTA President, Republican Women's Club President, and local government leader. She gathered an extensive network of friends around her and was the first to arrive at a party and normally the last to leave. She once read, "He is a success who lives well, laughs often and loves much!" It became her philosophy of life.

She married Wayne Comley of Damon as a young woman, and raised three sons with him. As that phase of her life ended, she married Robert Carlyle of Lake Jackson, Texas, who took her to live in places she had only dreamed of including Australia, Japan, Hong Kong, and then back to Lake Jackson. After Bob's death, she lived for several years at Surfside Beach where morning walks along the water filled her with pleasure and her involvement in community governance gave purpose to her life on the beach. She uprooted herself numerous times and lived in Georgetown and Sweeny, eventually returning to Lake Jackson. She spent the last three years of her life living in Bryan, Texas.

She was preceded in death by her parents; her siblings, Marjorie Patterson, E.L. Patterson, Sue Slattery, and Jonelle Hudson; both husbands; a granddaughter, Molly Comley; a grandson-in-law, Barry Casey; and a great grandson, Tristan Streb.

Dorothy is survived by a vast assortment of friends; numerous nieces and nephews; and her three sons and their families, Rick and Cynthia Comley of College Station, Herb and Lori Comley of Sweeny, and Mic and Mary Comley of Lake Jackson.

She was blessed with six wonderful grandchildren who made her life complete, Tiffany Casey, Bethany Comley-Streb, Geoffrey Comley, Molly Comley, Mike Comley, and Magen Smith; and with five amazing great grandchildren who brought joy to her heart, Mason and Piper Smith, Aurora and Jacqueline Streb, and Geoffrey Comley, Jr. Each of them has their own special memories of "Gamby". She will be greatly missed by everyone whose lives she touched.

A memorial service celebrating Dorothy's life will be held at a future date when it is safe to gather. In lieu of flowers, the family requests that donations in her name be made to the Alzheimer's Association.

To order memorial trees or send flowers to the family in memory of Dorothy Carlyle, please visit our flower store.