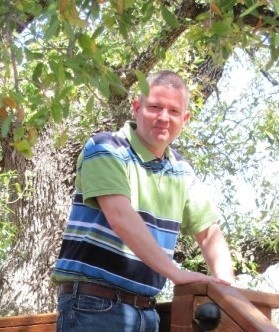 Dustin graduated from Southwest Texas State University where he earned his Bachelors in Business Administration. While at SWT Dustin met his wife Kimberly Ann McMillan of San Marcos, Texas. Kimberly and Dustin were married on October 19, 1996.

Dustin first priority was his family and when Kimberly asked him to move closer to her job he did so without hesitation. Dustin, Kimberly, Thayman, and Hadley moved to Lockhart, Texas. While in Lockhart, Dustin and Kimberly were blessed with their third child Toryn.

In 2013, Dustin and Kimberly made the decision to move their family to College Station where Dustin began his career with Texas State Optical.

Dustin loved life and had many different interests. If you knew Dustin you knew that one of his biggest loves in life was sitting on the beach with his kids. He had a love for fishing and would take his kids to the lake or coast to do just that. He also enjoyed hunting on his family's land in Three Rivers. Dustin loved learning all that he could about American History but especially World War II. You would often find him watching Netflix on the weekends or just sitting outside under the stars.

Dustin was predeceased by his grandfather and grandmother, Taz and Roberta House, as well as his grandmother, Troy K. Glenn (Nonnie). He is survived by his wife Kimberly; three children, Thayman, Hadley, and Toryn; his parents Bobby and Pat House: his older brother Todd and wife Jill, his younger brother Rowdy and wife Jennifer; his cousin Gary (who he considered his brother) and wife Stacey Glenn; his aunt and uncle Kathy and Henry Luddeke; as well as numerous nieces, nephews, and cousins.

Dustin had an insatiable love of life. He was a man who was loved and respected by all who knew him. He was a modest man who enjoyed the simpler things in life and truly loved his family. He will be deeply missed by those who knew him.

To order memorial trees or send flowers to the family in memory of David House, please visit our flower store.