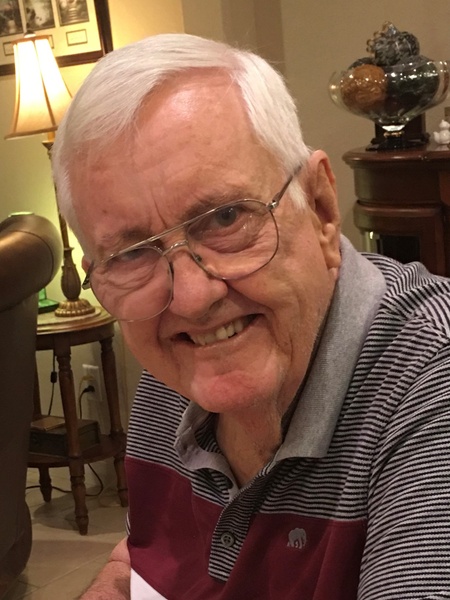 
Dale Fox passed away at his home in Bryan, Texas, on Saturday, January 16, 2021, at the age of 85, with members of his family at his side. Dale was born to Lloyd and Bera (Lewis) Fox in Kendalia, Texas, on November 1, 1935, and spent his early years in Austin, Texas, graduating from Austin High School and subsequently attending the University of Texas in Austin.

He married Phyllis Ann Greebon, the love of his life, on September 13, 1956, and moved to Livingston, Texas, in 1960 as an employee of the Army Corp of Engineers to work on the Lake Livingston dam. He subsequently started Fox Surveying & Mapping and spent the next 30 years in Livingston, where he and Phyllis raised their three children - Jimmy, Jerry and Judy. Dale and Phyllis moved to Bryan/College Station, Texas, in 1988 and spent the next 20 years alternating between homes in College Station, Galveston, and Alamogordo, New Mexico, before returning to Bryan/College Station in 2012.

Dale was an extrovert and lover of people. He had a larger-than-life persona and leaves behind many "Dale stories" for his family to cherish and laugh over in the years to come. Most importantly, he was a lover and follower of Jesus and had a Kingdom focus that went far beyond his local church. He especially had a heart for at-risk children that had never experienced the love of Jesus. Without question, his greatest legacy is Camp of the Hills, a camp for inner city children that he and his cousin, Nelson Lewis, founded on the shores of Lake Travis in Smithwick, Texas in 1990. Only God knows how many lives have been impacted through the Camp of the Hills ministry over the past 30 years - both children and counselors.

Dale was a dreamer and entrepreneur at heart. He could be impulsive and impressionable at times and was known for never letting careful planning or analysis slow him down, traits that didn't always serve him well! However, those same traits were also his greatest strengths. He was absolutely fearless in pursuit of any vision. That fearlessness, coupled with his contagious passion, tenacity and effectiveness in persuading others to share those dreams, led to many great legacies that will have a lasting impact.
Dale was predeceased by his parents and his sister, Frances Fox, and by his oldest son, Jimmy, with whom he so longed to be reunited. He is survived by Phyllis, his wife of 64 years; Jerry and Susan Fox, his son and daughter-in-law; Judy and Chuck Byars, his daughter and son-in-law; Lisa Bowden, his daughter-in-law; seven grandchildren - Meredith Fox, Morgan Scott and husband Ricky Scott, Harrison Fox, Hayden Fox, Casey Fox and partner Jason Gibbons, Cody Byars, and Alexandra Bowden. He was also blessed with five great grand-children - Haley Fox, Haven Fox, Emily Scott, Sawyer Scott, and Jimie Fox Gibbons. Dale is also survived by a host of other relatives and friends who loved him dearly.

In lieu of flowers, the family suggests that any memorial contributions be made to Camp of the Hills (www.campofthehills.org), A&M Christian Counseling Center (www.amchristiancounseling.com), or a charity of your choice. Hillier Funeral Home in Bryan is in charge of arrangements. A private burial service will be held at the Aggie Field of Honor on Wednesday with a visitation and celebration of life on Saturday, January 23rd at 2:00 p.m. at A&M Church of Christ in College Station.

The family would also like to thank the caring staff of Hospice Brazos Valley as well as Angela Juarez and her daughters, Candace and Alexis, who have provided such loving care to Dale and Phyllis during the past few weeks.


To order memorial trees or send flowers to the family in memory of Dale Eugene Fox, please visit our flower store.