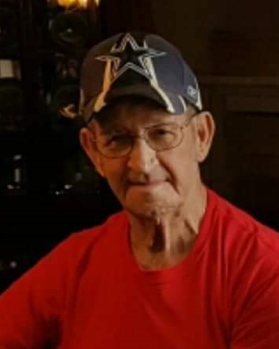 Curley Joseph LaCombe was born on Feb. 18, 1939 in Lacassine, Louisiana, Jefferson Davis Parish to Theogene and Allie LaCombe. He grew up in the Evangeline/Jennings area.

He and his brothers spent much of their childhood days hunting, fishing, and making music. He helped to feed his family and entertain them. His family included sisters, Bernice, Myrtis, Mildred, Rita, Fay and Tina; and brothers, Robert, Cliff, Wilford, and Kenneth.

He began working at a young age, providing money for both himself and his household, his big break coming from acquiring a job with Blum Tree Services. Curley then moved to Texas where he continued working for Blum. He also worked off-shore, at Gooseneck Trailers, Texas Mobile Home outlet, Oakwood Mobile homes, and had his own mobile home service company.

Curley met and married Sue Ball, and with Sue, he helped to raise three boys, Mike, James and Larry Ashley, and they were also blessed with their daughter, Karen. They later divorced, but remained friends. Curley then met and eventually married Gracie Brimhall, and he acquired another daughter, Tammy Nobles. In 1975 Curley and Gracie had a daughter, Stephanie.

He was a hard worker and provider for his family. Although he was not a religious man he was a Godly man, and exhibited those attributes, which taught his children what was important for them to live a full and happy life.

He loved his Cowboys and spent hours watching them play, reading about them on the internet, and reading about them in books and magazines. Curley also loved to watch boxing and MMA fighting. In his later years, he became an avid movie watcher: Sci-fi, westerns, and horror movies were his favorites. His family loved his cooking days - everything from Bar-B-Q to Gumbo and Boudin.

Curley was blessed by the true friends that he had throughout his life, including Charlotte and Leon Krolczyk, Shorty and Pauline Choate, Erby and Doris Cooper and Gene and Ginnie Comeaux.

He was preceded in death by both parents, Theogene and Allie, his wife Gracie, sons Mike and James Ashley, granddaughter Kailee, brothers Cliff and Wilford, sisters, Rita, Mildred, Bernice, and Myrtis.

To order memorial trees or send flowers to the family in memory of Curley LaCombe, please visit our flower store.