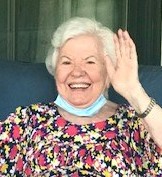 
Concepcion Bilbao de Rodriguez, 86, of Bryan, Texas, went home to be with her Lord and Savior on April 17, 2021. Concepcion was born on October 24, 1934, in Valencia, Spain. As a young child, Concepcion and her family immigrated to Mexico to flee the Spanish Civil War. Her and her mother crossed the Atlantic in a ship called the "El Partenon" where they met Miguel, who later married her mother and adopted her.

When Concepcion was 20 years old she met Juan, the love of her life, while on a trip to Spain to spend time with her family. While exchanging money at the bank Juan worked at, Concepcion caught his eye and they had an instant connection. After spending a year in Spain, Concepcion and Juan returned to Mexico and got married. They later moved to the United States and had three sons, Juan Miguel, Carlos, and Joaquin.

Concepcion spent some time attending college at the University of Texas in El Paso. After a few years, she left so that she could dedicate herself to taking care of her beloved husband and raising her children. Concepcion loved her sons very much and always encouraged them to pursue an education. She was very proud when one of her sons became an engineer and the other two became doctors. She would often be found telling her children, "I love you and I am immensely proud of you."
In Concepcion's spare time she loved to read, watch Netflix, and travel with her friends and family. She visited many countries, but her home country, Spain, would always be her favorite. Concepcion was also a woman of great faith. She was Roman Catholic and enjoyed spending time reading the bible and praying to God.

Concepcion was a caring, kind, and dedicated woman. She was a selfless mother, loving wife, and dependable friend. She believed that hard work combined with a good education could open many doors in life. She will be deeply missed by all who knew her.

To order memorial trees or send flowers to the family in memory of Concepcion Maria Rodriguez, please visit our flower store.