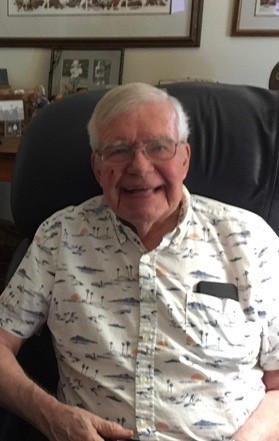 Dr. Charles H. "Chuck" Bowman died August 17th in College Station after a short illness and a long battle with Parkinson's Disease. He was 84 years old. He is survived by his wife of 35 years Lynn A. Holleran of College Station. Chuck was born and raised in Pittsburgh, Pennsylvania and was the only child of Bill and Mildred Bowman. He received a BS degree from Pennsylvania State University, and MS and Ph.D. degrees from Texas A&M University, all in petroleum engineering. Chuck was an outstanding leader in both business and education during his lifetime. He was named a Distinguished Alumnus of Penn State in 1996 and an Association of Former Students Distinguished Alumnus of Texas A&M in 2015. He was also a member of the Texas A&M Petroleum Engineering Academy of Distinguished Graduates, and a member of the Triangle Fraternity Wall of Fame.

Chuck had a distinguished career in the international oil industry that spanned four decades. He began his career with Gulf Oil Corporation in Pittsburgh in 1960 as a research engineer. He served six years in Venezuela in supervisory roles in exploration, geology, and reservoir engineering. He later became General Manager, Crude Oil Sales for Gulf Oil Trading Company and in 1976 was transferred to Houston after being named Vice President, Energy Regulation and Compliance for Gulf Refining and Marketing Company. He became Senior Vice President of that company in 1980, and its president in 1981. In 1983, he was named President of Gulf Oil Products Company. In 1985, Chuck joined BP America in Cleveland where he served as President, Old Ben Coal Company and Senior VP, Petroleum Products and Refining. In 1987, Chuck moved to London where he served as General Manager - Europe for BP Oil International. In 1990 he moved to Australia to assume the role of Managing Director of BP Australia Limited and Chief Executive Officer of BP Oil Australasia. In 1993, Chuck returned to Cleveland as Chairman and CEO of BP America., a position he held until his retirement in 1996.

Chuck's hobbies and interests included model railroading, antique furniture restoration and woodworking, as well as the maintenance of his horse and cattle farm in College Station. Chuck and Lynn have been generous supporters of academic, cultural and social programs. Among the gifts they have given to Texas A&M are endowments for International Programs, the Department of Petroleum Engineering's Resource Center, the College of Liberal Arts' Cervantes Project, as well as a College of Engineering faculty fellowship. They are also Endowed Diamond Century Club Members and members of the Texas A&M Foundation Legacy Society. Chuck and Lynn also created several endowments at Penn State University including The Dr. Charles H. Bowman and Lynn A. Holleran Early-Career Professorship in the John and Willie Leone Family Department of Energy and Mineral Engineering, the Lynn A. Holleran and Charles H. Bowman Academic Excellence Fund in Petroleum and Natural Gas Engineering, and the Ward Studebaker Horse Farm Endowment.

After being diagnosed with Parkinson's Disease in 2012, Chuck maintained a positive attitude and spirit as his physical condition declined with the progression of his disease. He never complained or expressed any bitterness about his condition, preferring to enjoy being able to spend time with family and friends and considering himself fortunate to be able to continue to live in his home on the farm with Lynn. The family wishes to express its deepest appreciation and thanks to Marcus Martin, Hannah Weah-Wymola, and Debrah Taylor for the loving support, assistance and caregiving they provided to Chuck during the years of his extended illness. Their support enabled Chuck to continue to live at home, and he was eternally grateful to be able to do so.

A memorial service will be scheduled for a future date when circumstances will permit friends and family to gather together in person for a celebration of Chuck's life.

The family kindly requests that in lieu of sending flowers, please consider a donation in Chuck's honor to The Autism Treatment Center in Dallas, Texas. (www.atcoftexas.org).

To order memorial trees or send flowers to the family in memory of Chuck Bowman, please visit our flower store.