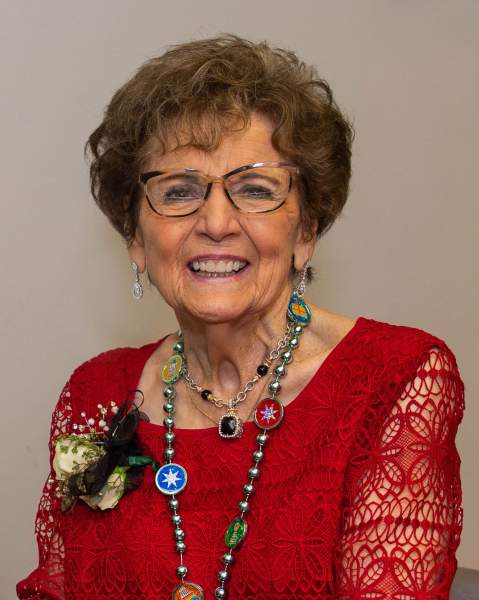 
Camella Falsone Scamardo, of Bryan, passed into everlasting life on Friday, September 18, 2020, after 91 years of earthly life. She was the faithful and devoted spouse of her husband, Peter Luke "Pete" Scamardo, who predeceased her and with whom she shared almost 70 years of marriage. Camella often said her wedding day -- November 6, 1949 -- was the happiest day of her life, and Pete without hesitation said marrying Camella was the best decision he ever made. Their story was highlighted by KBTX Channel Three's "Happily Ever After" series in 2015.

On January 17, 1929, Camella was born as the tenth and youngest child of Joe (Giuseppe) and Frances (Francesca) Falsone of Highbank, in Falls County, Texas. Camella's life was rooted in and shaped by the security of her loving family. She was predeceased by her parents; brothers, Jim, Robert, Tony and Joe; and sisters, Frances Riestino, Mary Dicorte, Rose Denena, Benetta Wenning and Angeline Cangelosi.

In 1949, Pete brought his new bride home to Mumford to live with his parents, Luke P and Mary Varisco Scamardo, who embraced her as a daughter and predeceased her in death. When asked about living with her in-laws, Camella said she was just so happy to be with Pete.

Camella met Pete in June 1945, where they were paired to stand together in the wedding of a cousin. Pete was struck by the thunderbolt (colpo di fulmine) when love strikes someone like lightning, so powerful and intense it cannot be denied.
Pete graduated from Texas A&M College in 1947. During their courtship, Camella was introduced to Aggie sports, and over the next 70 years they would watch countless football and women's basketball games together. They were Gold Reveille donors to the 12th Man Foundation and season ticket holders for 40 years.

She was an excellent cook, understanding the importance of the family sharing a meal, which had to include bread. Camella's favorite pastime was playing cards, the primary form of family fun growing up in the 1930s. For 50 years, Bridge was her favorite card game and winning high when she played could make her day. She also enjoyed playing poker with her family and continuing the family tradition of teaching her children and grandchildren a Sicilian card game "scupa".

Camella was a faithful Christian with deep and abiding faith and trust in Jesus Christ, and devotion to Mary, the Blessed Mother. Growing up in Highbank, the Falsone family lived across the street from the Catholic Church. It was there, during the dark days of "the War" (WWII) when her brother Tony was a POW, that her faith in prayer was confirmed when he returned home safely in 1945. Twice each year, Camella and Pete would bless their cotton fields, in the spring to protect against insects and again in the fall, for a bountiful harvest. With much hard work, those prayers were often answered. Morning prayer with The Word Among Us and evening recitation of the rosary were hallmarks of her daily life. Most important was the Eucharist, which was the bread of her life and sustained her as a woman of faith. One of the joys of living in Bryan was attending daily Mass at St. Joseph Hospital as often as she could. Her faith called her to travel to Medjugorje (Bosnia) where the Blessed Mother had appeared and later to Oberammergau (Germany) to witness the Passion Play of Jesus.

Camella's joy in traveling began when she and Pete drove in his Buick convertible to California for their honeymoon. She traveled regularly with the Gold Medallion Club but also enjoyed trips with her children, sister Angeline, nieces, and nephews.
After Pete passed, Camella insisted that the cattle operation - Circle S - continue as their legacy. Viewing her cattle brought her much joy and connection to her life with Pete.

A visitation will be held from 6-8 pm, on Thursday, September 24th, at Hillier of BRYAN. A second visitation will be held from 12:30- 1:30 pm, on Friday, September 25th, at St. Joseph Catholic Church. A Chaplet of Divine Mercy will follow beginning at 1:30 pm, with a Mass of Christian Burial to begin at 2 pm. The graveside service will follow at Mount Calvary Catholic Cemetery, with a reception to follow at Hillier of BRYAN.

To order memorial trees or send flowers to the family in memory of Camella Scamardo, please visit our flower store.