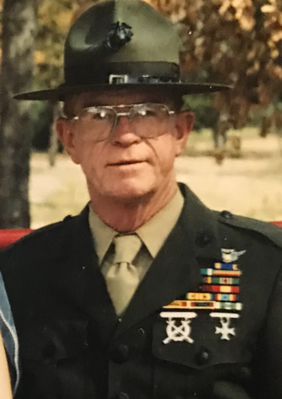 
MGySgt Billy G. "Hoot" Gibson, 75, United States Marine Corp. Retired., went home to be with the Lord on September 10, 2020.
Billy was born on May 25, 1945, in Salem, Illinois, the son of the late Mary and William Gibson. He was the seventh child of thirteen siblings.

He joined the United States Marine Corp. in December 1963, bravely serving his country for 28 years until his retirement in 1992, with the highest enlisted ranking of Master Gunnery Sargent.

In the Marine Corp., Billy worked in Aviation Mechanical Fundamentals and Aviation Structural Hydraulics. Ending a six year tour in and out of Vietnam, Billy returned to the United States and was selected for Drill Instructor duty in San Diego, California.
Following his Drill Instructor duties, Billy was transferred to El Toro, CA, with duties as Airframes Chief, Maintenance Control Chief, Quality Assurance Chief and Maintenance Chief.

Upon retirement, Billy moved from California to San Antonio, Texas, and resided there until 2008, in which he moved to Hilltop Lakes to be closer to his beloved daughter, son-in-law, and two grandsons.

He was a loving Father, Grandfather, and friend. He loved making people laugh and met no stranger wherever he went. Though being deemed tough in character, he had a kind soul and loved deeply. He will be sorely missed by all.

Billy was preceded in death by his parents and three siblings. He is survived by his daughter, Judy Coleman; son-in law, Troy Coleman; two grandsons, Lance and Landon Coleman; several brothers and sisters; and many nieces and nephews.


A Celebration of Life will soon be scheduled as we honor his life, legacy and 28 years of honorable service to his country and his flag.

Once a marine, always a marine. Oorah!


To order memorial trees or send flowers to the family in memory of Billy Gene Gibson, please visit our flower store.