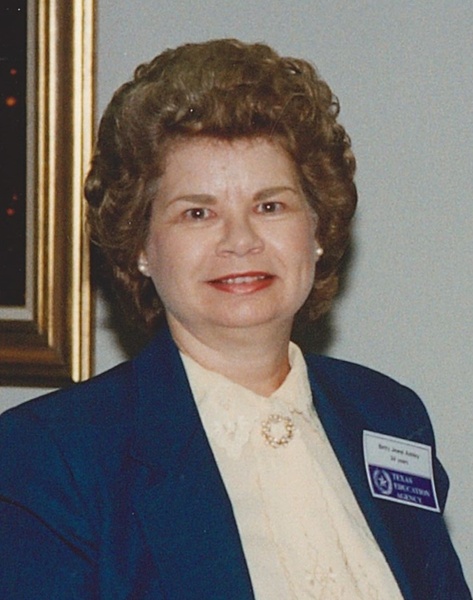 The family moved to Austin, Texas, during the summer of 1957 and soon Betty began working at the Texas Education Agency. That being her only place of employment, she retired from the TEA in 1994 after 34 years of service.

Betty was an active member of the Asbury United Methodist Church in Austin.

She spent much of her time patently caring for her relative during their senior years. While remaining in the family home, both Betty's parent were able to remain in their home during their final days. She enjoyed gardening, quilting, and other handiwork.

In March of 2017, Betty moved to the assisted living area at the Crestview Retirement Center in Bryan. During the last one and a half years, Betty was lovingly care for in the Memory Care Unit at Crestview.

Betty was predeceased by her parents, George and Annie Ashley; and her brother, Edwin Webb Ashley.

She is survived by her brother Olly C. Ashley and wife, Grace Ashley. Three nieces and their spouses: Rachel and Tom Boord of Sachse, Texas, Rebecca and Pat Binder of Bryan, Texas, and Ruth and Ralph Emig of Rowlett, Texas also survive her.

Also surviving Betty are a great nephew and spouse, Justin and Brittany Binder and their daughter, Collins Grace Binder of Joshua, Texas, and a great niece and spouse, Amber and Matt Bischoff of Bertram, Texas.

A graveside service will be held in Austin at a later date.

The family expresses their great gratitude to the entire Crestview Retirement Community for their unending compassion and professional care for Betty during these past years. A special thanks also goes to the Staff of Brazos Valley Hospice.


To order memorial trees or send flowers to the family in memory of Betty Ashley, please visit our flower store.