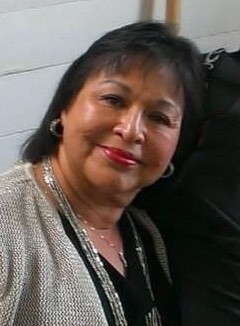 
Arcelia Reynosa, 70, of Anderson, Texas, joined her husband and parents in Heaven on May 17, 2021. She passed away peacefully at her home, surrounded by her pets and loved ones. A memorial service will be held at 1:00 pm, on June 5th, with a reception following from 2:00 to 4:00 pm, at Hillier Funeral Home in College Station, Texas. President David Hickson officiating.

Arcelia was born in San Angelo, Texas, to Arturo and Delores Soto, on November 12, 1950. As a young girl, her family moved to Houston, Texas, where she met her husband, Frank Reynosa. Eventually, Arcelia and Frank moved to Spring/The Woodlands, where they were active members of the United Methodist Church and the Lions Club. Before retiring from Houston Lighting and Power, they moved to Anderson to build their dream home in the country. After Frank's death, Arcelia became a member of The Church of Jesus Christ of Latter-day Saints.

Arcelia was an avid reader and enjoyed watching mystery and Hallmark movies. Arcelia loved her DIY projects, sewing, and crafting projects. She loved visiting with her friends and neighbors and was known for her gift of gab!

To order memorial trees or send flowers to the family in memory of Arcelia Reynosa, please visit our flower store.