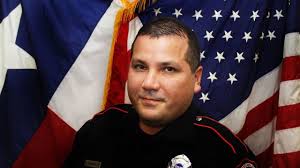 
Hector M. Camarillo (aka Scooby) was suddenly met with a call to his heavenly home during holy week on Sunday, April 5, 2020, at the age of 47. He was born on December 20, 1972, at P&S Hospital in Alice, Texas, to the proud parents, Domingo and Vilma Camarillo. He was preceded in death by his grandparents, Mr. & Mrs. Mario Navejar,Sr., and Mr. & Mrs. Rosalio Camarillo Jr., and sister Joanna Marie Camarillo. He is survived by his parents Domingo and Vilma Camarillo, brother Michael & Jennifer, sister Debbie, nieces Ashley & Brittany, girlfriend Elizabeth, and numerous uncles, aunts, and cousins.

From a very young age, Hector, always had a keen interest in becoming a law enforcement officer. The ever growing collection of hot wheel police cars eventually trickled into researching the job field in school. The research then led into ride-alongs with local police officers. The experience that he had with those ride-alongs led him to applying to the police academy. Sgt. Camarillo graduated from TEEX Central Texas Police Academy on March 16, 1999. Sgt. Camarillo lived a life filled with great valor in serving and protecting his community for Madisonville Police Department, Madison County Sheriff's Office, and other law enforcement agencies over the past twenty years.

One of his first major achievements that became widely known through his law enforcement agencies was when he arrested an inmate, Michael McCumber, who escaped from the Texas Department of Criminal Justice Wynne Unit in Huntsville on July 21, 2008. McCumber had been serving a sentence for a string of burglaries at the time he was captured. There was a plaque placed in honor of Sgt. Camarillo's arrest in the Texas Prison Museum. In May of 2017, he was awarded the Life Saving Award when responding to a call and administering CPR to an unresponsive resident of Madisonville until the medics arrived at the scene. Trooper Justin Reese, and Officer Lucas Cunningham also assisted with the CPR. In September 2013, he was honored by Governor Rick Perry, at the State Capitol, for the Star of Texas Award after he was critically injured in the line of duty on the way to a call when a large pick-up truck crossed over the median hitting his patrol car head on. The accident that significantly changed his life on June 22, 2010, was deemed as a close call when the first responders arrived at the scene and found him unresponsive. It was a long road to recovery after being told by his doctors of the possibility of not being able to walk again, but this news only made him fight harder. He sustained many serious injuries from the accident and endured several surgeries to repair the damages with titanium plates and rods. In the end, he defied all odds and proved his doctors wrong. After countless months, days, and hours of physical therapy he began to walk again. The doctors on his case were amazed by his rapid recovery, and began to call him a "walking miracle." At the beginning of 2012, he started back to work for the Madisonville PD as the head field training officer. He went on to training his rookies, and became a beloved mentor. A few years later, the proud day presented itself when Hector was promoted to the rank and title of Sergeant.

Hector (aka Scooby) was a man who just enjoyed the simple things in life amongst his loved ones. He loved barbecuing at family get-togethers, eating (all you can eat ribs), DJ-ing our favorite songs, always being there in person or the phone cheering on our favorite football teams, and coming up with an excuse to get away to the beach. He was a son who never forgot to call his mom every other night, and came to visit as often as he could. He was a brother, and a friend that we could all go to with our problems. The man was a rock and a stone at any given moment that you needed him to be present. There were so many that he called family such as his law enforcement officers, the staff of the city and the county, all other law enforcement agencies he worked with, and the people he came into contact with in his daily life.

It has been an incredible journey reading, and speaking with the copious amounts of people whose lives were touched by him. Most of all, we believe that, Hector, will be remembered for his big heart, and the love that he had for everyone. The legacy that he left behind was that of a hero, wherein heroes live on in our hearts and minds forever. Real heroes never die.

A first responder honor procession will take place from Hillier Funeral Home of Bryan to the College Station City Cemetery on Friday, April 24 at approximately 2:45-3 PM. All services are private, but the public is invited to honor the route of Villa Maria Road and Texas Ave (practicing social distancing).

A link to the live streaming service will be provided soon.


To order memorial trees or send flowers to the family in memory of Sgt. Hector Camarillo, please visit our flower store.