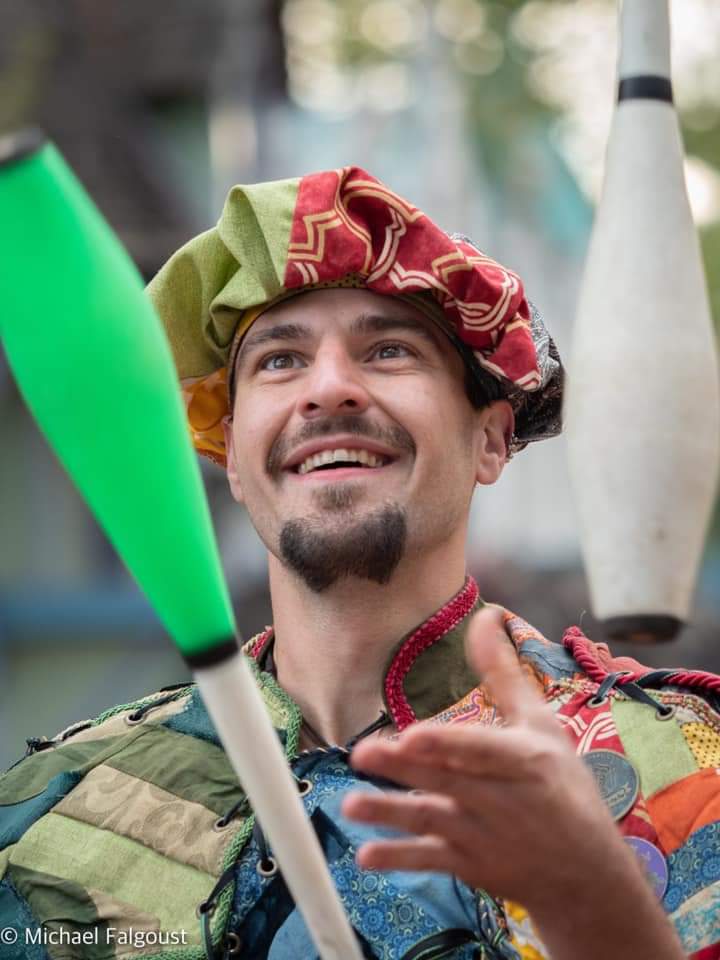 Patrick Hugo "Patty-Cake" Roller passed away April 12, 2019 at the age of 27. Patrick was born June 14, 1991, in Saskatoon, Saskatchewan Providence, Canada. He moved to Texas when he was just six years old, so he considered Bryan/College Station his home. According to his mom Adria, he was a hell-raiser from the get-go and had his own sense about him. He was always smiling and that amazing personality of his was forever attracting people and friends to him. He was well-spoken and intelligent, a good student when he was in school and could have done almost anything he wanted.

Although Patrick worked as a pizza chef and welder, Renaissance was where Patrick found his true calling in life. Artistic, dramatic, and outgoing, he took his talent for juggling and outgoing personality to the masses. The gypsy lifestyle suited his free-spirited and adventurous nature. Patrick always loved having fun, but was always conscious of doing the best for those around him. People always said they felt safe when Patrick was around them at fair. He was confident, and his infectious light helped lift anyone around him up. Patrick loved everybody and no one was ever a lost cause to him. He was always a hugger and was well-known for his hugs.

Patrick leaves behind his father Larry Roller and wife Shelly of Bryan; his mother Adria Roller and wife Laura Vandiver of Princeton, Texas; his brother Justin Maxim Roller and girlfriend Jade of Saskatoon, Canada, his brother Michael Daniel Potter and wife Haley of Bryan, his brother David Paul Stanley and wife daisy of Franklin, and his brother Brandon Frederick and wife Ashley of New Brunesville ; his trusted friend, confidante, and number one person, Kalyn Robertson of Bryan; his nieces and nephews, Teagan, Aslan, Branson, Glenn, Tobie, and Charlie; his Champion family, as well as too many treasured friends, loved ones, and coworkers to name. He will long be remembered as a bright light to all who knew him.
To honor Patrick's life, his family has planned a celebration of his life at Sherwood Forest Faire, (1883 Old Hwy 20, McDade, TX 78650) on Friday, April 19, 2019 at 3 PM.


From the heart of a fellow faire-folk who loved Patty-Cake dearly:
"Today I learned that yet another member of our tribe has departed. Patrick was always on stage putting on a fantastic show for those around him. He endeared himself to all the Rennie kids onsite because he treated them as equals as he taught them juggling, kindness, camaraderie and so many other tricks and traits. Such a beautiful, artistic influence. He has been at Sherwood since day one. My kids grew up with him, adored him, and this evening were utterly devastated to learn of his loss."

"I spent some time this evening/morning at Patrick's "spots". Visited the Champions firepit long after it was dormant - bittersweet, because I hoped to find some mutual friends to commiserate with yet was glad that everyone was getting some sleep and presumably will be able to function tomorrow. (the show must go on?) Then I sat for a spell outside Como's where Patrick used to sling pizzas, remembering his hawking techniques and how he used to juggle when pizzas weren't an immediate necessity. I then wandered over to the Puffin, where he loved to juggle with his manually adept friends on Monday mornings. I stood there for probably 20 minutes thinking about all the bowling pins in the air. (not sure who sleeps in there, but their gentle snoring was adorable). I spent the longest near the puppet wagon, where during Summer Camp Patrick taught dozens of campers to juggle, not to mention how to think more highly of themselves and to be kind. My last stop was the Greenwoode Theatre, where he was recently able to demonstrate his skills for his fellow community of Sherwood workers."

"I will miss you dearly, Pattycake, as will so, so many of your peers. My greatest wish right now is that in your next life you comprehend everyone's esteem for and dependence upon you."

To order memorial trees or send flowers to the family in memory of Patrick Roller, please visit our flower store.