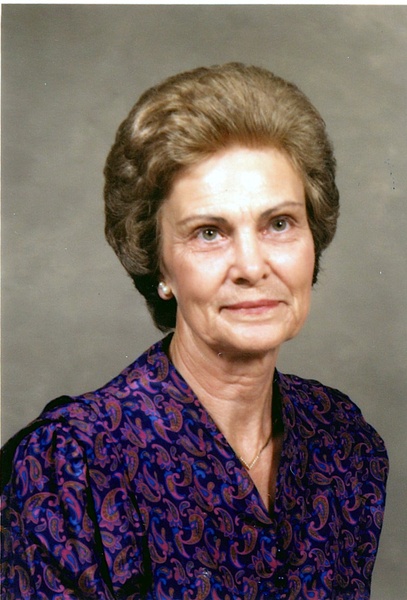 Mildred was born on the family farm in Washington County on July 10, 1932 to Ernest and Minnie (Borchgardt) Fieseler. Growing up on a cotton farm, Mildred was the fourth of eight children: Ernest, Alice, Ruth, Sigmund, Leroy, Esther, and JoAnn. She worked with her siblings and enjoyed a typical country life. Attending Wesley Community School and Salem Country School, Mildred usually got a ride with the teacher, who would drive the buggy by the farm on her way to school in the mornings. Because she loved school so much, she attended eight grade twice.

Mildred met her beloved husband Joe when the troopslet off at the local restaurant where she and her sisters Ruth and Alice worked. They fell in love very quickly and wanted to marry as soon as they could. The two were blessed with four children: Shirley, Allen, Carolyn, and Sharon. She was a kindhearted and good mom to her children, even though she tended to be a bit headstrong. In a unique way, she was very loving. As her family and church were the cornerstones of her life, she made sure to raise her children in the church and sent them to St. Joseph Catholic School, where she was always room mother. Each Christmas, the family opened presents on Christmas Eve before heading off to Midnight Mass. Family was very important to Mildred. Even though she was part of a very large family, they managed to get together often, and family reunions and functions were always a big part of Mildred's life.

Although she worked at Hancock Fabrics for a time, Mildred's calling was to be a homemaker. Mildred was an amazing cook, known for her sweet ginger snap cookies, coconut cream pie, pecan tarts and Christmas Cookies, as well as her tacos, lasagna, and roast. She loved playing board games with her grandchildren, especially Chinese Checkers and Parcheesi. A very competitive player, if you won a game against her, it was because you actually won, not because she let you. She also enjoyed playing dominoes, sewing, quilting, and gardening in her flower bed.

Although Mildred was baptized Lutheran, she became a devout Catholic, attending St. Joseph's Catholic Church. She worked with the Women's Guild, funeral meal committee, and quilted for the parish festival. A bit headstrong, Mildred was meticulous and always wanted what she wanted, when she wanted it.

Mildred leaves behind her daughter Shirley Hodge, her son Allen Bartos, her daughter and son-in-law Carolyn and David Schaefer, her daughter and son-in-law Sharon and Jeff Greensage, her grandchildren Stephen Hodge and his wife Sarah, Christine Spofford and her husband Richard, Melissa Bennett and her husband Phillip, Jennifer Johnson, Hannah Greensage, and Tyler Greensage, her great-grandchildren Kaylee Fuller, Benjamin Spofford, Patrick Spofford, Aubrey Bennett, and Jacqueline Johnson, and her sisters Alice Macik, Esther Lampe, and JoAnn Reimer. She was preceded in death by her beloved and devoted husband of more than 44 years Joe Bartos, grandson Baby Hodge, her son-in-law Travis Russell, her sister Ruth Wiehe, and her brothers Ernest Fieseler, Jr., Sigmund Fieseler, and Leroy Fieseler.

To honor Mildred's life, her family has planned a visitation at Hillier Funeral Home of Bryan on Monday, June 10, 2019 from 5-7 PM, with a Rosary Service at 6:45 PM with Msgr. John. There will be a time of public viewing on Tuesday, June 11, 2019 at Hillier Funeral Home of Bryan from 9-10 AM, followed by a Mass of Christian Burial/ Funeral at St. Joseph Catholic Church of Bryan at 10:30 AM with Fa. Steve. Burial will be at Mount Calvary Cemetery immediately after the Mass. A family meal will follow the graveside service at St. Joseph Parish Activity Center.

To order memorial trees or send flowers to the family in memory of Mildred E. Bartos, please visit our flower store.