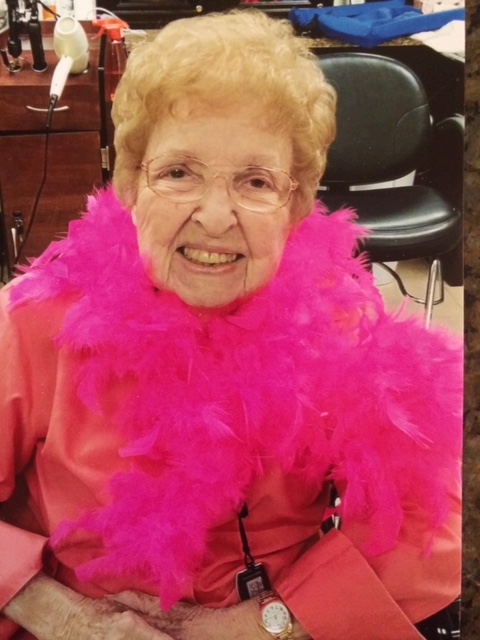 Marie Elizabeth Hensz, age 93 of Bryan Texas, formerly of Harlingen, passed from this life to be with her Lord and Savior Jesus Christ on August 15, 2019. She was born to Noble and Viola (Roettger) McIntyre on January 30, 1926. She married the love of her life Robert L. (Bob) Hensz, her husband of 73 years, in 1942. Home for Marie and Bob was many places due to Bob's 27 year Air Force Career, but when he retired they settled in Harlingen where they lived for 30 years. After an additional 3 years in Kerrville, they relocated to College Station, to be near their son.

Marie was very creative and loved to write. While following her husband during his career, she was very involved in Officer's Wives activities, where she wrote humorous skits for many occasions. After he retired, she then wrote skits for the Life Begins at 40 golf tournaments and from 1982 until death she created their yearly "Nonsense by Hensz" greeting cards. She also wrote a children's story book for each of her great grand children. Even in her last years she was creating more children's stories which she occasionally dictated to her son. She loved to entertain and frequently had parties and dinners at her house, for which she cooked and prepared everything.

Until incapacitated, she regularly attended Peace Lutheran Church in College Station and was a true Child of God. She raised her family to love the Lord and was a beloved wife, mother, and mother-in-law.

She was preceded in death by her parents, Noble and Viola McIntyre, step mother Alta McIntyre, a sister Dotté McIntyre, her husband Robert L. Hensz, and son-in-law William Cheney.

Funeral Service will be at Peace Lutheran Church on August 22. Interment will be at the Fort Sam Houston National Cemetery in San Antonio, with her husband at a later date.

With grateful hearts the family thanks the staff of the Isle at Watercrest for their continual care over the past years and the staff of Hospice Brazos Valley for their kindness and care.

As an expression of sympathy, memorial contributions may be sent to Hospice Brazos Valley, or Peace Lutheran Church, College Station.
To order memorial trees or send flowers to the family in memory of Marie Hensz, please visit our flower store.