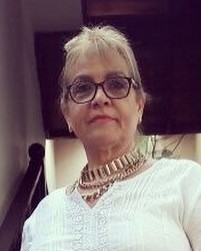 Gina Margarita Arias de Viñas met her Lord and Savior, Jesus Christ on Tuesday, August 27, 2019, at the age of 60.

Gina was a vibrant, colorful woman who was full of life. She would light up a room with her big, loving personality. Her family and dog Ronnie were the most important things in her life. She loved and cherished her children completely and worked very hard to make sure they were taken care of.

Gina worked at the Kroger in Bryan for 11 years. Before that she worked as an assistant manager at Mi Cocina for eight years. She was an honest, hard-working woman who gave everything she had in what she did. When she wasn't working, Gina enjoyed cooking, baking, and cake decorating.

In order to honor Gina's life, her family has planned a Catholic Rite on Friday, September 6th at 6 pm, followed by a Celebration Reception at Hillier Funeral Home of Bryan.

To order memorial trees or send flowers to the family in memory of Gina Vinas, please visit our flower store.