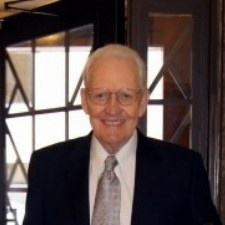 
Aurelius Ford Madison, Jr., born December 19, 1930, passed from Earth to Heaven on Monday afternoon, August 19, 2019. Ford ran his race victoriously and finished his course. He joins Barbara, his beloved high school sweetheart and wife of 58 years, in the presence of their Lord and Savior, Jesus Christ.

Ford was a faithful Christian layman and accomplished businessman. He impacted countless lives with his service to his Lord around the world through his participation and leadership in numerous ministries such as the Lausanne Movement (1974, 1989), and as co-founder of the Dallas Christian Leadership Prayer Breakfast (1980). He also served on several non-profit boards including the Dallas Theological Seminary Board, as a chair for four years and long-standing member; The Navigators; the English Language Institute of China; International Students Inc.; Leighton Ford Ministries; and Trinity Christian Academy. He was particularly focused on discipleship, encouraging and equipping ordinary believers to more effectively represent Christ in varied arenas of life.

Ford was a gifted entrepreneurial developer and investor in retail and commercial real estate. He graduated from Texas A&M University (College Station, Texas) in 1952 with a degree in Dairy Manufacturing. He was a member of the Corps of Cadets, Corps Staff, and the distinguished Ross Volunteers. He is a lifetime member of the Association of Former Students.

Ford was a loving, godly husband, father, grandfather and great-grandfather. He was preceded in death by his father, Aurelius Ford Sr.; mother, Nellie Williams Madison; sister, Marion Leonard; and wife, Barbara Dryden Madison. He is survived by five dearly loved children (and spouses): Randy (and Elizabeth) Madison; Marla (and Brad) Stringer; Cindy (and Mark) Newman; Melinda Madison; and Matthew (and Libby) Madison. He also leaves behind 13 greatly loved grandchildren and their many spouses: Heidi and Dave Walker; Jennifer and Matt Henry; Stanton and Lizzy Newman; Stephanie and Luke Hoselton; Shannon and Sam Eddings; Meredith and Matt Hutchings; Russell Newman; Emily and Andrew Herrig; Chris Madison; Nathan Stringer; Collin and Brooke Madison; Kyle and Katie Madison; and Davis Madison. Five of his grandchildren followed in his footsteps and studied at Texas A&M. Additionally, he was fiercely proud of his 19 great-grandchildren. In his passing, Ford also leaves behind a beloved sister-in-law, Peggy Collins (Amarillo, Texas), numerous nieces and nephews, and one cousin-in-law, Ruth Madison.

Ford lived with incredible generosity toward others. He faithfully shared his testimony of God's saving grace and sought to encourage those whom God brought across his path. A significant part of his legacy and a testimony to God's merciful saving grace is that all of his children and their spouses have personal relationships with Christ; because of Ford's witness and discipleship, people in many nations profess Jesus as Lord.

The entire family pours out their gratitude to God for his life. In the presence of Christ, his faith has become sight (2 Corinthians 5:7).

To order memorial trees or send flowers to the family in memory of A. Ford Madison Jr., please visit our flower store.